If you read my last blog, you may recall how I wrote about how many budgies we had in the backyard this past summer.  Four was a ridiculously sad amount of "lost" birds.  I swear that I have jinxed myself as just days later after publishing that blog along came budgie number five.  I really think the jinx started earlier in the summer when talking to a neighbour about how many domestic birds I had seen in the 'hood over the years and that it had been quite a while since I last saw one.  Someone, somewhere heard this and said "hold my beer, you asked for it".

We had just gotten home early Sunday afternoon from a walk and I went out to the yard to see what was going on, looking for any migratory birds, check on my pigeon buds, etc.  I wasn't out there long when I heard a budgie tweeting.  I thought "oh no!"  I raced back to the house, grabbed a towel, our rescue cage and my camera.

It took me a bit of looking before I finally spotted the bird in the foliage along the fence.  It's a male as you can see by his blue cere (nostrils). 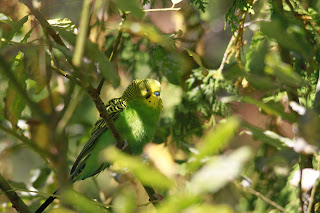 I made noises at the bird, clicking and silly squeaky sounds to get his attention.  He flew out of hiding, went right over my head and then landed on some wires across the yard. 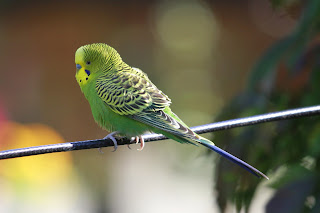 The bird spent the afternoon out back, either on the ground looking for food with the other birds or flying about the trees, checking out some other backyards but always returning to ours.  It was a mild  and sunny October afternoon. 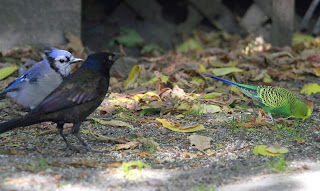 I wish I took some video of the bird as he had no fear of the bigger birds, and none of the other birds gave him any grief for being out there.  I remember when Misfit was living out back that summer, the blue jays were constantly chasing her.  They knew she didn't belong out there.  Misfit always got away but she never had peace when they came in.  This boy though, it was like he belonged out there and always had been out there. 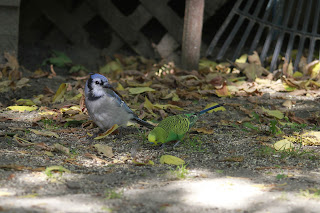 The budgie showed no interest in the cage, no matter where I set it over the next few hours.  I even put my bluetooth speaker inside, playing budgie calls, to try and lure him in.  No luck.  I couldn't throw a towel over him because all the other birds would flush at the sight of a towel in my hand, and when they flew, so did the budgie.  I gave up on any sort of chase as it got later in the day.  The temperature was going to drop down to 4 Celsius over night, so I really wanted him to have a good feed before it got dark.

Most of the other birds were disappearing by 6:30 PM.  The budgie was still here. I watched him fly into our lilac tree a couple times before finally picking a branch to sleep on for the night.  He was about 12 ft off the ground, surrounded by branches and leaves.  There was no way I could grab him in there, or get a towel over him.

A crappy cell phone shot of him up in the tree. 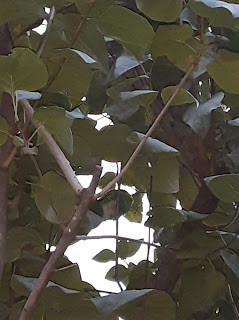 I left him be and checked on him a couple times after dark before I went to bed.  He stayed put.  I think he had a better sleep than me despite the chill in the air.  I woke many times throughout the night thinking about him.  I was out of bed by 6:30 the next morning and setting my plan in motion.  I was going to try and trap him with a box, stick and long piece of rope.

As I stepped outside to set things up, I had to go back in and put a heavier coat on.  We haven't had a cool temperature like this in 6 months.  After I had the trap set, I sat in a chair and waited.  The budgie started to tweet around 7:20 AM.  By 7:30 he was out of the lilacs and down at the back.  He came to ground a few times looking for food.  I should add that during my set up of the trap, I cleaned the ground up of any spilled seed.  There was food out there but under the box that was raised on one end.  If I wanted a blue jay, I could have had one as this bird in the shot below spent a good 20 minutes or more under the box! 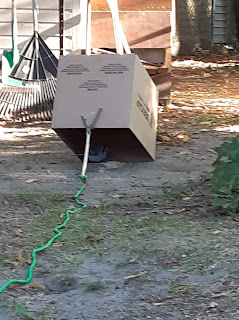 A few times he came so close... 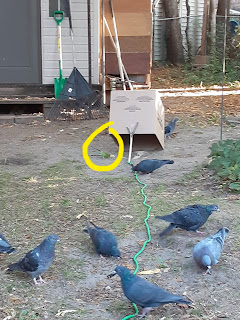 I left the trap, as much as it pained me to do so, but I needed a coffee at one point, another time I needed a heavier coat, then I needed to get a bit of breakfast in me.  My absences were short and I kept thinking that this would be when he would go under the box.

Finally after almost 4 hours, he went under the box, I pulled the rope and he was trapped.  I brought out an old sheet from the shed, slid the box over the sheet, then wrapped the sheet around the box, and then brought it inside.  I then got the cage, bringing that in too.  He put up a fight with my hand as I tried to grab him.  He couldn't see nothing but my hand and when I had him, he bit me quite hard.  This wasn't my first budgie bite and I wanted this ordeal over with, so I held onto him, brought him out from the sheet and into the spare cage.  As soon as I let go of him in the cage, he hopped on a perch and totally relaxed.  What a good boy! 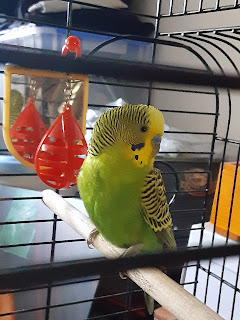 We've been debating on what to do with him.  Do we want another bird after over a year without?  Maybe.  How will Merry and Molly react to a bird in the house?  But before taking him in, we agreed to try and see if anyone is missing him.  I posted something on a lost bird page for Ontario.  All I got was 2 likes.  I was stunned at how many budgie posts were on this page, both for lost and found birds.  Unfortunately the found birds was greater than people posting about losing their bird(s).  Many of the found budgie posts were just people posting a photo of one they saw outside along with a location; not many were actually caught.  So sad especially as we move through fall and the nights are getting very cool.  These birds originate from Australia and don't do well in our cold Canadian climate.  I posted him in a couple other places.  I didn't care for some saying to leave him be, let him have a free life outdoors even if it is short instead of a life in prison.  I'd agree if this was a bird that could survive out there and not A) freeze to death and B) be so dependent on us humans to feed it from bird feeders.  I tried to explain this as much of a waste of time as it was and added that not every captive bird living in a house with humans has a terrible life of being ignored and locked up.  Drama everywhere, eh?  Doesn't matter where you go, what you do, someone is gonna stir shit, especially on the internet.

I've had a few offers to take him.  One I said "absolutely not" to as they are a breeder and wanted him to help make more budgies for the person to sell.  This is a huge part of the problem in the pet trade, people breeding animals for profit.  Budgies are sold quite cheap through private sales, hell even in pet stores they are inexpensive.  If the bird becomes a pain to someone because of the mess, or the squawking, then losing $15 or $30 is nothing to lose by opening the door and letting it fly out and having a budgie free home again.  I've seen adoption posts for these birds through the city, trying to home birds found, and the fee is a mere $7!

I can only imagine how many budgies are sleeping outside throughout Toronto right now.  Are they wishing they were in warm houses again with a seed dish all to themselves and not having to fight for supper?  Poor things.  They may be small but they have big personalities.

Okay, let's find joy in the rescue of this guy here.  One less stray bird on the street.  I will update soon on what became of him.  Will he become a Mueller?

One last pretty shot of him in our holly bush.  This would be a lovely Christmas card, maybe in Australia.  What do you think? 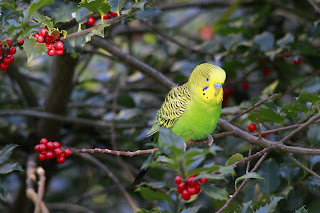 Lastly, I read any comments left.  I reply to some but I don't think the person gets notice that I do.  Jennifer I learned about Muskoka from you.  Thank you.  Angie, unfortunately blogger has made a change where people who follow a blog no longer get notification on when a new blog has been published.  Why would someone think that change was a good idea?

Okay, it's 12:30 in the morning.  It has been a very long day.  I need sleep.  I hope this blog came across well.  I will probably read it over again tomorrow after my coffee.

Thanks for stopping in!

LOVE the picture in the Holly bush 💚💛