First signs of Autumn and it's August!

Have you noticed anything different up in the sky within the last few days? Do you ever look up to the sky? Some do, some don't. If you do, you may notice a sight such as the photo below. "A bunch of birds flying around. What's the big deal?" you might ask. Well, it's really not a big deal unless you absolutely dread the end of summer. It's the first signs of Autumn coming and Fall Migration beginning. 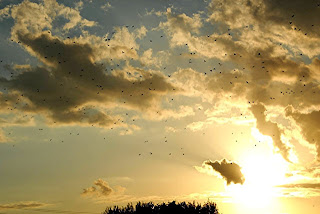 Today at work, on my lunch break, I look out to the front grounds and noticed a sight similar to the photo below... a flock of Brown Headed Cowbirds. This is the first flock I have seen since their return back in the Spring. I said to my co-workers, "Oh, it's all over now." A few heads pop up, curious to what I am talking about. Some inquire and listen on as I explain my comment. There weren't many happy faces in the lot as we didn't have much of a summer this year. What can we do? Nothing! Go through the seasons, make the best of the them, and hope for a better summer next year.

I borrowed these pics via Google images but hope to have some of my own to share as my backyard can turn into quite a hot spot for a feeding stop over through the month of September. The sounds can be deafening with some flocks. I gladly throw handfuls of shelled peanuts and seeds to my feathered friends, assisting them on the long journey ahead. Maybe you do the same?
Posted by Rob at 5:43 PM 6 comments:

Know Your Neighbor and their Pets

This past Saturday, just as we were leaving the house to go out for dinner... the rain had just started to come down (again) and as we sat in the Monte Carlo, letting it run for a moment (them oldies), I happened to notice my neighbor's cat moseying along on the other side of the street. So, what's the big deal? Well, to anybody else on the street who may have noticed this feline, they would just think it's another cat in the neighborhood. For us, knowing this cat, we knew she should not be out on the streets roaming around. 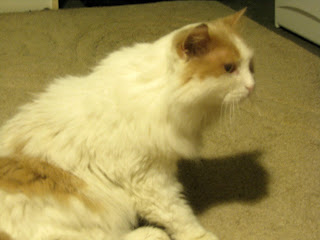 Louise is one of my neighbor's handful of "misfit" cats that she has taken into her home over the years, one of a handful, who may have not had a chance at a good life because of her *imperfections* but we all see her as a little more unique. Louise is deaf. Louise has 3 legs. So, as you can see, Louise definitely should not have been wandering about the street.

It only took us a second before we were out of the car, dashing across the street, going after her. Lucky for us she didn't hear us coming, and her quite laid back personality had her just sitting there looking up at us as we moved in. My neighbor wasn't home, I made a few attempts to contact her with no luck. So Louise was scooped up and brought into our home. Meadow slept through the whole ordeal, even as we locked Louise in the storage closet off the kitchen while we went out for dinner.

Finally my neighbor returned my call and as I told her we saw Louise walking up the street, she went into a panic and tearful rant. I had no opportunity for almost 30 seconds to get a word in to let her know she was safe with us.

My neighbor was going to be gone for another few hours, which was fine by us. I tell you, for a foreign cat being brought into a strange home, there was no stress with this one. She was fine in the closet for the 2 hours we were gone. When let out, she figured out where the stairs were to the basement and down she went and slept the next 3 hours till she was re-united and returned home.

From the time my neighbor left till the time we left and saw Louise, approximately 2 hours had already passed. Another 5 hours would go by before my neighbor returned home. If we had not seen Louise and taken action... who knows what the outcome may have been. A deaf cat sure can't hear cars or other threats. A 3 legged cat sure wouldn't have much of a chance defending herself. Lastly, Louise likes to spend much of her time in the basement so there is the possibility she may not have been noticed missing until the following morning.

So in my head the worst case scenarios have been played out but you never know, cats are quite remarkable creatures. Louise may have made it back home, if we had not seen/taken her, and might have ended up sitting on the front steps waiting for her "mommy".

I am happy with how this story all played out, like fate stepped in, how timing was so well with the beginning actions to it. So perfect! Louise is right across the street from us as we sat in the car. Things like that.

I tried to get a better/clearer shot of her but she really isn't keen on the flash. 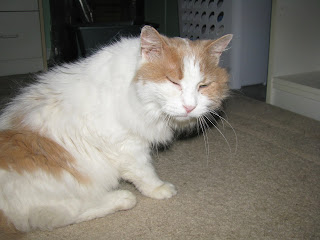 If anyone has been wondering what has been up with me and my blog, even though I made mention some time ago about cutting back through the summer months. I had hopes of stocking up on blog topics for the fall... but with all the rain this summer and as July arrived, some bad flooding in the basement has taken over our lives. It's finally going to be repaired this week, taking about 15 days to complete, and hopefully then I can relax and enjoy the remaining weeks of summer with our animal friends. Nobody has been neglected through this though...