This really isn't a cheat but since I've been so busy with the Falcons lately, and we were due for our July Bird Canada blog, my latest one is over there. Click here to check it out. I really put my heart into this one so I hope some take a moment to view it.

Since publishing that blog, the adventure has continued with our young bird Avro. 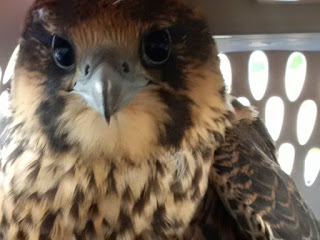 About a week ago friend and fellow Falcon watcher Kathy reported that one of the kids hit the glass pretty hard, and people inside the office saw it then veer away from the building, flying lower and lower, then disappearing down into the nearby park. Any glass strike is a concern. At the moment, at the very least, it was good the hit did not kill him.

I got myself together and headed down to go on a hunt for Avro. Bruce who was doing some observations downtown quickly got on the subway and headed to the Etobicoke site. I texted another Falcon watcher, Lucie, who lives in the area and she also came down as soon as possible to help look for him. Kathy was also out walking the area (even though she was supposed to be working).

I should add that Avro's siblings, Bliss and Aries, were sitting atop the condo roof adjacent to the nest. That is how it was figured out who hit the glass. There's that perk of having banded birds which I touch upon in the Bird Canada blog. One of the adults was seen in the park area and we figured they were watching out for their kid. Sure enough, Avro was found on top of a hydro tower some ways down in the park. His stance was good although he was showing signs of getting quite warm as the morning quickly heated up. 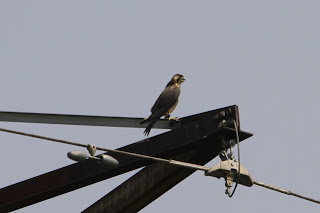 I was messaged that Avro was found and was heading over to meet up with the others, and see him. During my walk I tuned into some angry Blue Jays. A sure sign that a predator may be about. Knowing Avro was found and people were watching him, I decided to follow the angry bird calls. What could be the reason for their upset? A Hawk? Maybe an Owl? To my surprise, I found Avro's mom Darcy sitting low in a tree over Mimico Creek. She was watching the ducks below. Way back in the day Peregrine Falcons were called Duck Hawks. We've seen the females, who are much larger than the male Falcons, bring home duck on occasion. I snapped a few photos and then headed over to where my friends were with Avro. 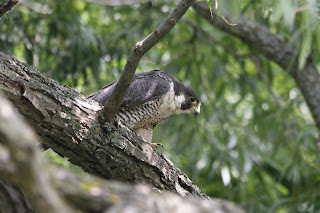 We chatted for a number of minutes before I had to leave and get myself ready for work. Kathy was quickly heading back to the office. Bruce was staying on site for a while to watch Avro, wait to see if he was going to fly, and if he could or not. Lucie was going to hang around for a bit as well but took a moment out to come with me and see Darcy since she was in a great spot for viewing.

Funny thing was I told them I would most likely find a Raccoon before I found Avro since I am good like that. During the dog days of summer I envy the animals. 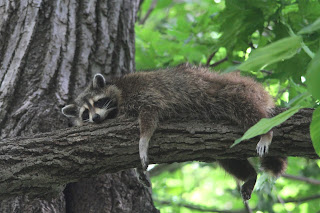 About an hour after I returned home, Lucie messaged me that Avro took flight and headed for home. He made it to the top of the glass towers with ease. Thank goodness! This is his first known window strike and hopefully his last.

This year at the Etobicoke Falcon site sure has been something. We are quite enamored with the young birds. The new parental pair being Lucky and Darcy have been amazing to watch. At this year's watch, when seeing the kids struggle in their first days of flight, we witnessed on numerous occasions where the adults would come out and try to help the birds get to a safe place to land. The adults would fly under and bump the young up higher, or guide them away from certain points. This is something I have heard they can do but never witnessed in 8 years, well, until now. After these moments, I had wished I had my camera and got some photos, but deep down I know I probably would not have. For one, with a struggling bird, my focus should be on the bird and where it is heading, and not a photo op, especially since I was alone. Also I know that most likely what I saw with my own eyes could never be captured in a photo.

Thanks for stopping in. Next blogs will be over at my Toronto Nest Blog in the coming days.
Posted by Rob at 9:53 AM 3 comments:

The Raccoon and the Apple

We've got 2 Raccoon families wandering the neighbourhood this summer. One mom has 3 kids while the other has 4. The 4 kid family have younger Raccoons than the other, I can tell by their size. Like most nights after work, I toss my apple core out back for whoever to find and finish up. In the past it's been an Opossum. Lately, it can be anything like an Opossum, a Skunk, a Raccoon and sometimes it's there in the morning and a Squirrel finds it. Last night this young Raccoon found it. I sat on a cinder block near the shed and watched him, taking a few photos.

"Hello. What are you?" Even though I'm a hairy guy and probably have dark circles around my eyes, he knows I'm not one of his kind. 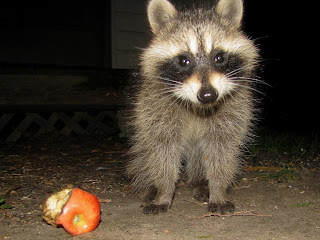 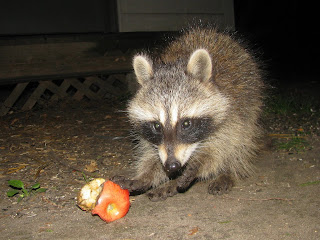 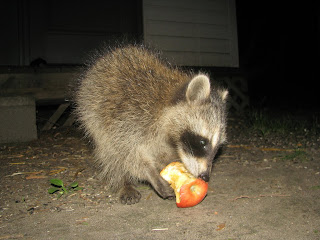 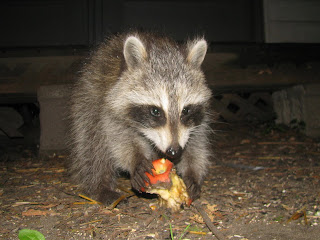 "A is Apple. B is for Belongs and it belongs to meeeeeeeeeeeee!" 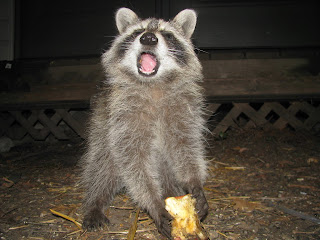 Then after a couple bites, he left it on the ground. I don't think it was something he really liked all that much. 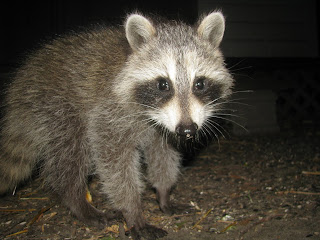 He looked at me for a moment. 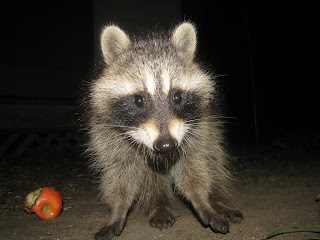 Then off he went back over the fence to where the others were dumpster diving in the neighbour's bin which he forgot to secure.

I Helped Some Chickadees

This is blog worthy and not just in my Toronto Nest Blog.

Back in May I had discovered some Black-capped Chickadees took to one of my nest boxes. I was rather excited about this. A few days later I noticed a House Wren at the box. The Wren had destroyed the Chickadees developing nest. I was upset about this. I returned a day later and was pondering on setting up another box. To my surprise, the Chickadees were back in the nest box, starting over. So I left them alone. I return a couple days later to find their 2nd nest was also destroyed by this Wren. Frustrated and confused was I on top of being upset. 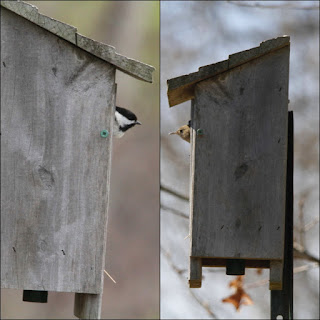 I decided to move the nest box as I thought it was unfair to these Chickadees that every time they start to build a nest, in comes the Wren to destroy it. I felt responsible since it was I who set up this nest box. I remember as I took the box down and pulled out the t-post, starting my walk to where I was going to this set up next and in came the pair of Chickadees. They were voicing some disapproval or "WTF?" above my head. I'm trying to help and now the birds are making me feel bad.

End result is the Chickadees had 7 eggs. All 7 eggs hatched. All 7 young successfully fledged. I am so happy about this outcome. 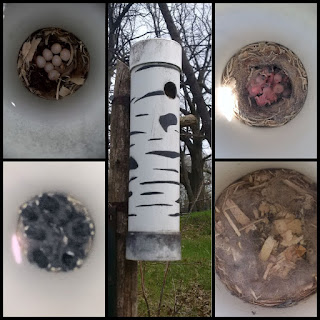 I know what a Wren is capable of. Last year we had a Chickadee nest in another area, also with 7 eggs. Four young not much more than a day old with 3 eggs soon to hatch when along came a House Wren who tossed all the young out of the box and he pipped the eggs. Of course that was it for the Chickadee nest. The adults left, the young perished and those eggs would never hatch. The Wren was already building a nest over top of the Chickadees' nest. You can understand a little more on all that I was feeling with this nest, this year.
Posted by Rob at 9:19 AM No comments: