I Assure You Spring is Here, or Almost

Here we are going into the third week of April and I, much like many others, are wondering... is it Spring or is it Winter? A couple days near +20c and soon after right back into heavy rains, cold temperatures and even some snow flurry activity.

Yes, it's Canada, this is how things are, deal with it. But we all like to talk about the weather, the good days but more so about the bad days. I always wondered why that was?

Anyhoo, I want to assure you that Spring is here... or almost.

First sign for me was the return of the Red-winged Blackbirds back in mid-March. Most Robins don't fly south anymore, so never mind what we were taught as children about them being the sign of Spring in this day and age. 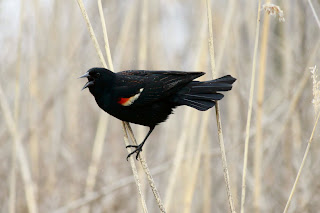 And speaking of Robins. I was feeding a pair last April and May whom have which returned this April and I am feeding these two in the same spot on the ground (near my swing) as I did last year. I am 110% certain it is the same pair. Two weeks ago I went outside and there was a Robin on a branch above my swing making a lot of ruckus. I was hoping they'd return and bought a small container of roasted mealworms the first weekend of April. I went inside, got the worms, set them near the swing post and in seconds he was down on the ground and having himself a good feed.

Here is Mr. Robin having himself a feed. 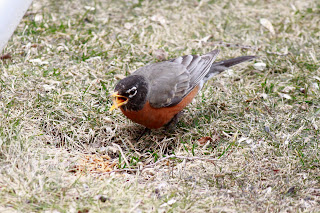 Here is Mrs. Robin waiting to get a helping herself. 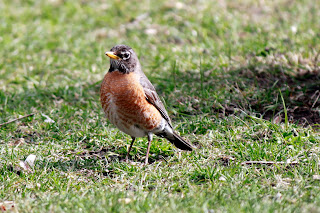 I never really gave Robins much thought in my life. Sure, they are cool birds. But so common. After spending nearly 2 months last Spring watching this pair, I found some new admiration for them. I enjoyed watching them hunt more so than anything. They'd run a couple feet, stop suddenly, remain still, run a bit more, and do the same thing over and over until they found an insect or worm. Now with this pair returning for a second year... they just might make the 2012 backyard calendar.

Other great sightings in recent weeks include Golden-crowned Kinglets, Black-crowned Night Herons, Tree and Barn Swallows. But I suppose the most exciting for the birder people is the word "Warbler". On April 18th, I saw my first Warbler for the year. A Yellow-rumped Warbler! And now I have seen two this week in different areas of Toronto. There are so many Warblers that pass through Toronto at this time of year, it's mind blowing. To see them, one is quite fortunate. They are small birds who seldom sit still.

Here's the first Yellow-rumped I saw. 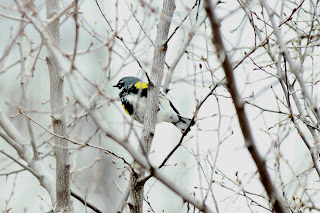 Here is one of many Golden-crowned Kinglets I have seen lately. They are much like the Warbler in the fact that they are a very small and quick moving bird. 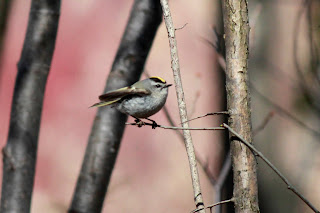 Other signs of Spring I have witnessed are the nests well on their way with our feathered friends.

The most exciting for me is a pair of Eastern Screech Owls who are nesting very close to my home. While I can't see mommy and the eggs; I often see daddy sitting near the nesting cavity resting through the day. 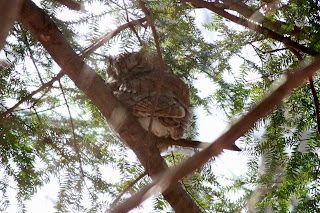 A pair of Red-tailed Hawks are nesting a little north of home too! 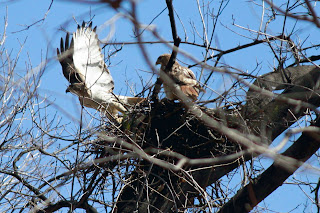 Some days there is a lot of activity around that nest! 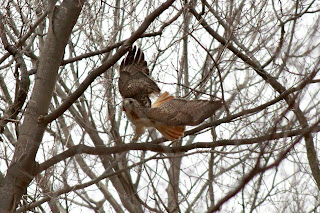 And right in our own backyard, a pair of House Sparrows are nesting in one of our bird houses. The same house a pair of Chickadees nested in a few years back. While we hoped for Chickadees again, almost anything is acceptable for us. 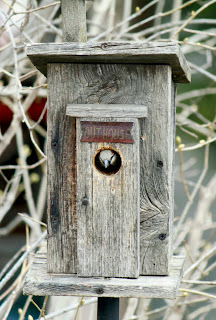 Before you are convinced... here are some signs of a lingering Winter such as these this week.

I saw four Common Redpolls on April 18th down at Humber Bay East Park. A bird who should be very north of us now yet was seen right along the shores of Lake Ontario. 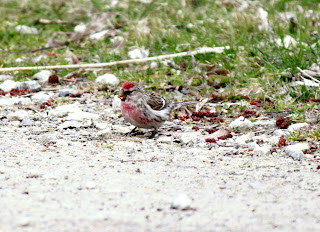 This female Red-winged Blackbird sure shows some signs of disapproval of the falling snow on that same day (the 18th) in the same park. 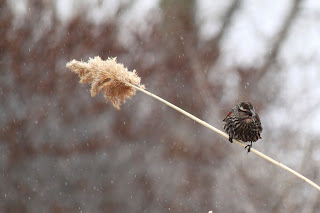 So, what do you think? April can be a fickle month, we should expect that. Let's just hope May is much better. What's the saying? April showers bring May flowers? Not sure how it goes when it's April snows...
Posted by Rob at 9:25 AM 2 comments: