On Saturday July 17, 2010, Angie and I were down on the harbourfront of Toronto. We were attending an event called "Rock the Yacht" with a couple of Canadian hard rock bands (Helix and Revolver).

As we trekked along the Queens Quay to our meeting location, we happened to notice an odd sight... a Black Crowned Night Heron, just hanging out on a bench at the Marina. A couple of people were around him, one guy was just about sitting next to him. So, maybe it's not an odd sighting down there? It sure was for us. Our first thought was that this bird was injured, but that was not the case. It seems he is a seasonal resident down at the Marina. Apparently the people (boat owners) feed him so he's not too afraid of humans. I only hope they feed him proper food for his diet 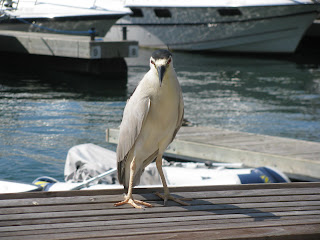 We've seen a couple of Night Herons pretty close to home... at Smythe Park off Scarlett Road. They can be spotted up in the trees circling one large pond. But, never have we seen one this close before! I just wanted to sit next to him, pat him on the head and take in a moment of being next to such a stunning creature. 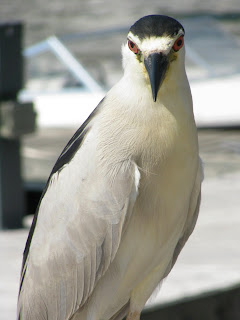 I took half a dozen photos or so and then we had to get on our way or else we'd miss the boat cruise. 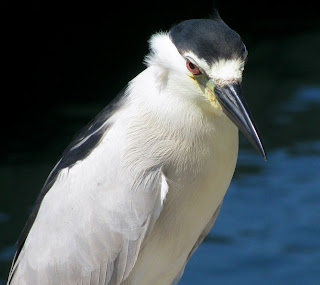 I don't know a whole lot about Black Crowned Night Herons other than, well, they are part of the Heron family, probably are a fish eater, maybe frogs too, and their name is suiting since they have a black crown. I assume the "night" part of their name means they are active in the night. So learn with me here as I pull some facts out from the all about birds website.

- Young Black-crowned Night-Herons often disgorge their stomach contents when disturbed (this habit makes it easy to study its diet).
- The Black-crowned Night-Heron may nest in the same tree with ibises or other herons.
- Adult Black-crowned Night-Herons apparently do not distinguish between their own young and those from other nests, and will brood chicks not their own. The nesting in colonies explains this.
- They live in various wetland habitats, including salt, brackish, and freshwater marshes, swamps, streams, lakes, and agricultural fields.
- They survive on eating aquatic invertebrates, fish, amphibians, lizards, snakes, rodents, eggs, etc.
- They tend to eat in the early morning hours and then in the evening after the other species have gone back to their nests.
- The height of an adult Black Crowned Night Heron is 22" to 26" with a wing span of approximately 46".

Some interesting facts for sure... lets see if I can remember those.

Thanks for stopping in! Oh, and here is a couple pics from the "Rock the Yacht" cruise... I know it's non-animal related but if it weren't for this cruise, there is no way I would have been in this part of the city and seeing this bird. Thanks for hosting this guys!

A shot of Toronto as we cruised around the islands. 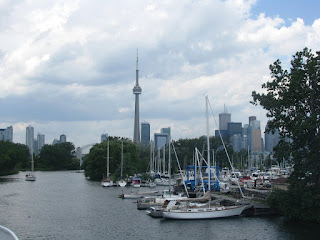 A large number of Double Crested Cormorants at the edge of the Toronto Island Airport. I am happy that our city has not participated in a large cull of the Cormorants that has been happening elsewhere. 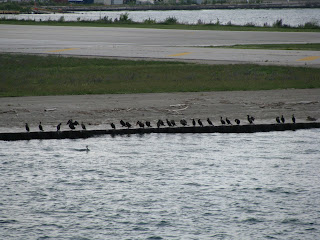 The skies sure looked menacing throughout the afternoon but the rain held off for us and we all had a great time. I heard it rained a few times inland about the city that afternoon. 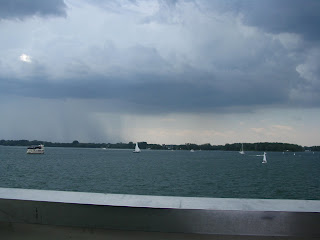 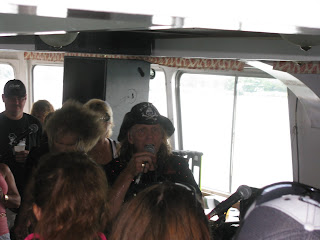 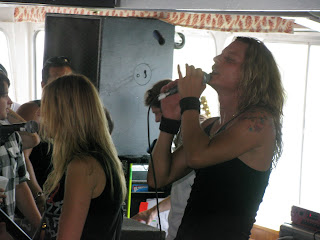 Nick and Laurie Green once again. 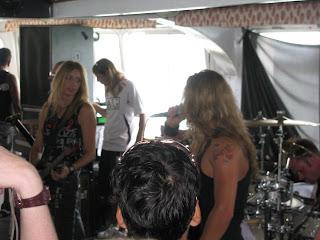 Season of the Cicada

Man, what a hot summer we are having this year! Those humidity levels making it feel like 40c or more are just too much! Personally I am not a fan but I have to wonder if it's made for some interesting moments in my backyard lately?

I have seen more Cicadas the past 10 days than I have ever in my life. I have seen them at various stages as well.

First, some may be wondering what exactly a Cicada is? Well, it's an insect. What kind of insect? I could run off the big species terms to you but it would probably mean as much to you as it does to me... good luck pronouncing it too. You know on those really hot summer days, you are sitting around the backyard and suddenly you hear a very loud buzzing for 10 seconds or more and then it stops? You know it's a bug but never knew what exactly it was. Well, that is a
Cicada. Some think they are part of the Grasshopper family or Locusts. Apparently not true. 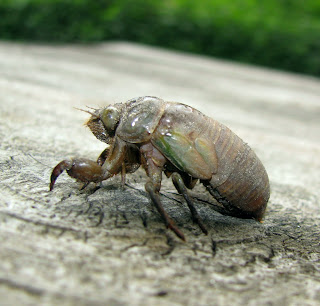 They can be quite damaging to trees and shrubs as the female cuts slits into the branches, deposits her eggs within (up to a couple hundred) and thus scarring the tree. When the eggs hatch, the newborn nymphs drop to the ground, where they burrow. Most cicadas go through a life cycle that lasts from two to five years. The nymphs feed from the tree roots, sucking the juices within. Then, one day, they dig and claw through the soil back to the surface, looking like a large beetle of sorts, where they cling tightly to a tree or other object and begin to molt (shed their skin) and start the final stage of their life... as a breeding adult. The adult stage is very short lived ranging from 4 to 7 weeks.

I found this Cicada just after the molt on the ladas below my deck about a week ago. 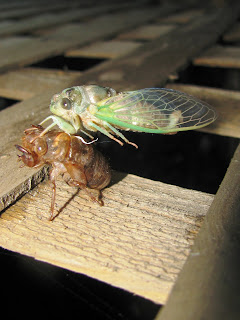 I have found the stage before they molt is a very trying time. It seems the Squirrels in my backyard have a taste for the juicy back end of these critters. I've witnessed more than a couple premature deaths of Cicadas due to Squirrel feasting. It is quite a shocking sight when one is not quite sure what is going on. The first time I thought the Squirrel was ill because of all the frothy goo dripping from his mouth. There is a lot of crunching and chomping as he breaks through the hard exterior. I guess the only way I can describe it visually is someone enjoying an over-filled Boston Creme donut... lots and lots of custard within. Sorry, I cannot think of another comparison.

Here you can see what a nice large rear end they have... good for eating according to my Squirrel friends. 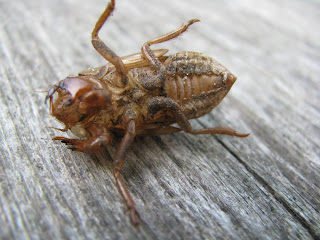 Scar the Squirrel enjoying a Cicada as a snack... 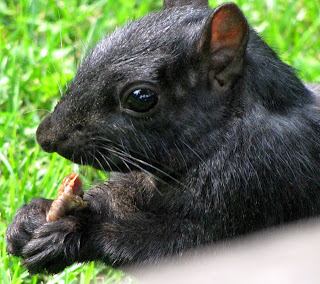 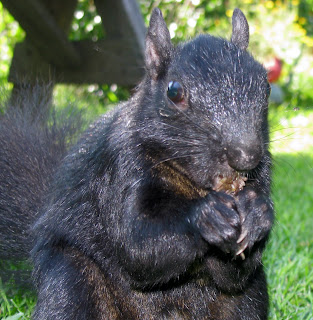 I have done a bit of research on this insect now as I do try to learn things about what I see in my backyard. The male is the one who makes the loud buzzing. The Cicadas in the GTA are about 2 inches in size. Some regions have them reaching sizes of 15cm (6 inches)! In some parts of the world Cicadas are a delicacy and are skewered or stir fried. In China, the hard shell after the molt has been ground up for medicinal purposes... but I have yet to discover what they believe the ground shell can do for a person.

The other day I found a pre-molt Cicada and placed it up on my picnic table. The insect was quite interested in my camera lens and followed it about the table. I have posted a video on YouTube of it... it's quite comical to say the least... excuse the clarity of the video though. Unfortunately moments after I finished recording, the Cicada was scooped up by one of the Squirrels and quickly devoured (see the Scar the Squirrel photo).

So, maybe Cicadas are more common than I think? I have spent 7 years in this backyard of mine but this year is the first for me really noticing them for so many days now... 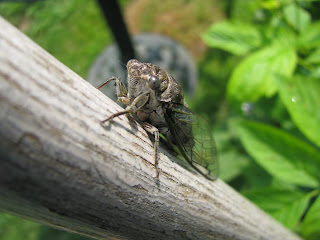 *note* all photos were shot by me with my Canon Power Shot SX100 (I do enjoy the macro option so much)
Posted by Rob at 6:01 PM 4 comments: