I found a pair of Long-eared Owls this week!

2011 is here, a new year, and 4 new seasons of adventure for a bird/nature/wildlife admirer and developing photographer like myself to enjoy.

2010 brought Angie and I seeing our first ever sightings of a Snowy Owl and a Great Horned Owl in the wild.

I now have another Owl species first for this year and hope to manage one more somewhere in my travels over the next couple months. This first being a pair of Long-eared Owls.

So, without getting into the details on where I saw this pair... allow me to share the moment with you here.

Rumors have been floating around about sightings of these birds in the GTA. Most people aren't very specific on locations because unfortunately there are people out there with selfish desires for a great photo to add to their cache or for financial gain and do not care how they get it... which could bring harm to their subject (the Owls).

I have heard this Owl species, like many of the others, are quite skittish and nervous with human presence. When an Owl gets to such a state of panic, it gets the hell away, and occasionally comes into harm to itself as it's not seeing entirely where it is going, but more focus on what they are fleeing from. That is how it's been explained to me. So, I didn't want to get to such a point with this pair. I enjoyed viewing them with the binoculars, taking them in visually, absorbing the sight and the moment, a few photos from a lengthy safe distance, hoping for one decent one to come out as I walked away, silently thanking them for the opportunity and turning around every few steps to be sure they stayed where I had found them (and they did). 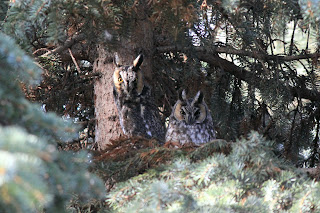 How did I find them? An area was disclosed through a message board on the internet, but the words from a friend of mine (not an exact location, just some advice) along with some research on my own brought me to find this pair.

Angie and I were up a day earlier trying to locate them and with no luck in a visual; but we did find evidence of them, or another type of Owl, being in the area. I found Owl pellets under a couple trees. Part of our research was on what certain types of trees house these reported Owls. Angie not being from the city, and perhaps due to her father being a woodsman, knew well enough what we were looking for in way of tree, identifying them among the various tree species that surrounded us. 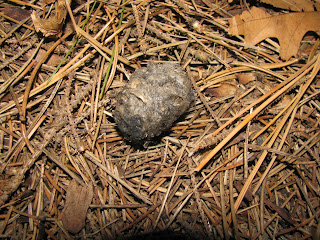 Did I just hear "What are Owl pellets?" out there? Well, basically it's what is left from the Owl's meal that the it cannot digest. This would include the fur, skin, bones and possibly some internal organs. The leftovers are compacted in the Owl's gizzard, forming them into a ball shape and some hours later, the pellet is expelled (vomited). An Owl cannot eat again until the pellet is gone from the body as it blocks the digestive system's entrance. Amazing how nature works from one species to another really.

Anyways, with the seeing of the pellets, I knew they were around, somewhere. It wasn't just a couple pellets, there were probably twenty of these gray fur balls. I would bet they were all field mice.

The next day I had the opportunity to go once again, and did so on my own, since Angie had to work. I skimmed every tree from a distance with my binoculars and many minutes later, as I was viewing the last 5 trees in the area, I spotted them on a branch, in full open view. Once I knew they were there, it was so easy to see them. They do blend in very well and if they were facing the other way, I probably would have missed them. And, the rest is as I mentioned above.

If you would ever like to find an Owl in the wild, a lot of patience is in order. Along with that, a healthy amount of respect to the birds and everything else (plant and animal) in the area. Stomping into a wooded spot, making noise and being very invasive won't get you anywhere. I mean, this is their home. How far would you get walking into a stranger's house and acting in similar fashion? Researching is also a key. Knowing what species may be in your area, where they would live if they were in the area, and so on. Also, listening to the other birds as you search may point you in the right direction. Chickadees are like little watch dogs in the forest. Listen for them and how they are vocalizing. Frantic calls often mean a predator is near such as an Eastern Screech Owl or small Falcon (sorry, won't always be an Owl). And of course, word of mouth is the obvious, and I hope it comes from a source that is respectful of the birds above all else and is being passed on to a similar person.