I wish I had more to share of our trip the other week up to the Muskoka region but I do not.  So after some pondering, I think another blog of bits from the last few months is due.  It's been a quiet summer as we spent most of it at home like we normally do but I am sure there will be some interesting "things" here to enjoy throughout the blog.
Early on in the summer I found this eastern screech owl while Angie was getting her hair done.  I think it was a year ago that I found an owl here and anytime we are over to this spot just west of the house (four times a year roughly for hair cuts or bang trims), I go for a quick look around.  The owl was just zoning about 25 ft off the path.  So many people passed by and had no idea he was there. 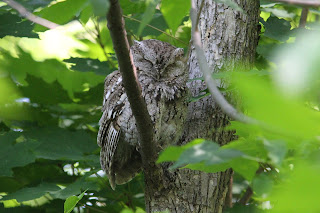 We were in the area in August as well but I couldn't find an owl in this small woodlot due to all the leaves.  I wasn't going off the path either...  1) didn't want to disturb anything and 2) I didn't want to pick up any ticks.
It was bad for budgies around here this summer.  More so than what I have ever seen.  Four birds came to our yard in just over a month.
This one on July 1st.  A female judging by the lack of blue color on the cere. 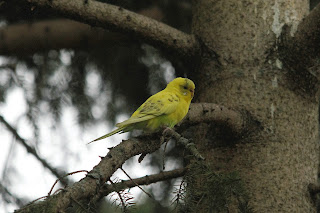 On August 6th we had two females, both were mirror images of our old girl Misfit.  I didn't have my camera with me as I was hoping to catch them.  The birds were very close to me but so were the pigeons.  I had a towel with me but anytime I moved my hand with the towel, the pigeons flushed and so did the budgies.  They both flew off together an hour or so later and we did not see them again.
This is Misfit in the front with Moonie behind.  Both of them were backyard rescues. 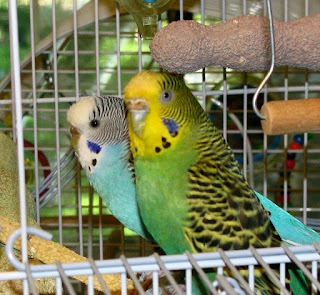 Then the very next day we had another budgie show up!  Again I tried to catch this boy but had no luck.  Look at that blue cere. 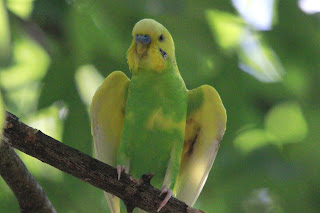 I should add that I had set out our spare bird cage when these birds showed up, just in case they came back, and hoping that they would figure out that food is inside.  That is how Misfit came to us.
We've had other budgies come in over the years but not in a while and never had more than one in a summer.  Having four in just over a month this year was very upsetting.  Some must have let all their birds go.
I was seeing osprey fly over the house this summer.  I've heard of them nesting along the Humber river but have never spotted a nest.  Seeing these birds during the summer months pushed me to look in parts of the Humber that I rarely visit. 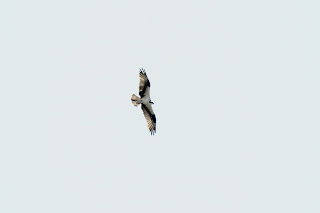 We didn't have a great summer with baltimore orioles this time around.  A pair randomly visited and we had two juveniles for a couple days in early August.  Normally for us, late August is pretty busy with easily eight orioles steadily coming in, loading up for their journey south. 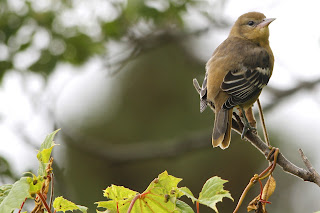 What we were blessed with this summer was more frequent visits from at least three ruby-throated hummingbirds.  Past years, they were here at first and last light, and rarely any other time of the day.  This year, especially through August, they were coming in all through the day from sun up until sun down.  I wonder if the really dry summer may be the reason?  A lot of their natural food source from the various flowers may have suffered from the many weeks of drought.  I'm glad we were able to help them along. 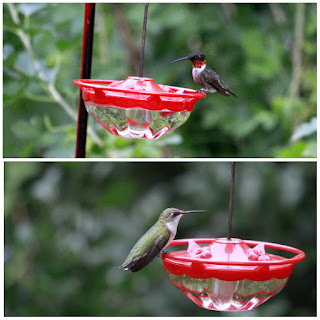 With more time at home than out and about, I brought out the macro lens again.  It's amazing how many teeny tiny creatures can be found in the garden.  Check out this oblique streaktail. 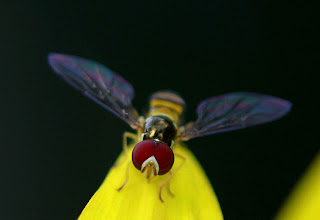 Then there's the webworm moth, or as I call them "hippie bugs" and Angie calls them "winnebago bugs".  No matter what one calls them, they are cool to look at. 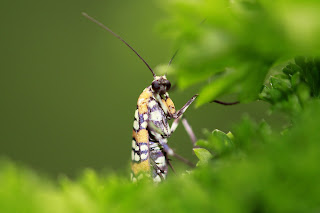 It was nice to see a few candy-striped leafhoppers this summer. 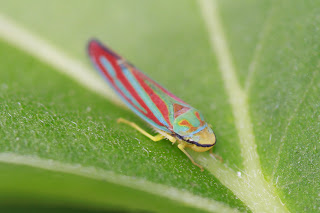 A cool surprise one morning was the lady next door blurting out "ewwwww, look at this big bug!" which of course got our attention.  I went over to see and was pleasantly surprised to see a big northern bush katydid.  I don't recall ever seeing one before.  They were having a large gathering at this house and were going to be using the BBQ which is where the insect was; so we moved over to our yard in a safe, quiet, sheltered spot where it spent the day. 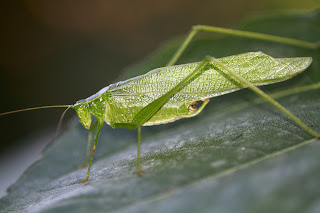 We've had a lot of dog day cicadas in the yard this summer. 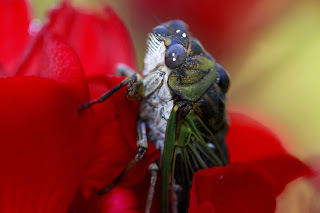 On a Sunday morning walk near the house, we chanced upon this fawn.  I haven't seen a fawn in many years.  Sure, it's an older fawn as this was late August when we saw it; but still a fawn.  It's mother was nearby but they weren't too concerned by us as we kept our distance and it was a busy spot for human activity. 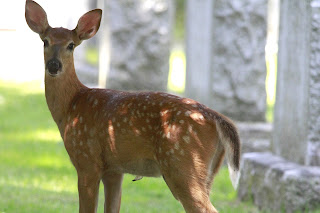 We haven't been blessed with daylight views of skunks this summer other than one morning.  Thankfully I had woken up early for some reason and spotted him shortly after 7 AM. 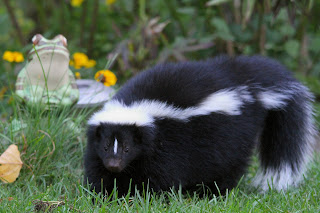 The mass of migrating common grackles that stopped in the same morning weren't too concerned by it's presence. 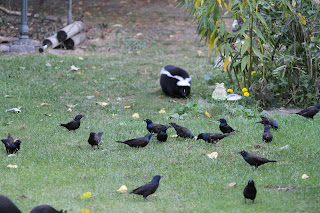 The raccoon family were MIA most of the summer except for captures on my trail camera during the night.  A couple of the kids recently made an appearance early one evening.  Cute little rascals, eh. 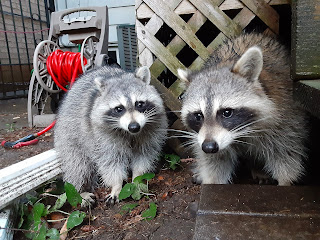 We have seen mom too, which is good to know that she is still around.  Our raccoon mom is older and limps around due to arthritis, our guess anyway.  She may let them stay with her through the winter but by next spring, she will be pushing them out of the territory as she prepares to have a new litter.
The cam has been picking up our mom opossum some nights as well as one, possibly two, new opossums.  We know mom by her tail stump. 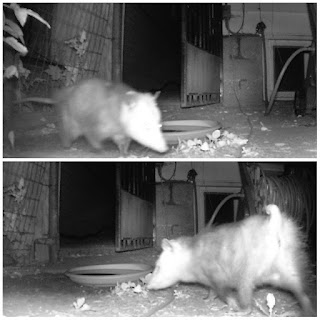 I'd love to see one with my own eyes again soon; but knowing they are around just by the trail cam captures makes me happy.  Here is one that used to use a hollow log in the yard as a hiding spot.  Unfortunately the log crumbled to bits over the years.  I keep looking for another one when out. 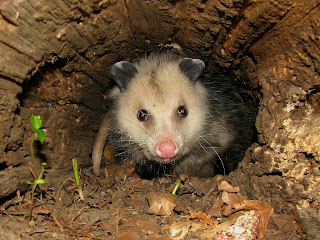 Gulliver is still a daily visitor here for the most part.  I think she's been coming to my hand for about one year now, and has been coming to the yard for approximately two years.  This is a recent picture of her.  The holly berries behind her make for a nice backdrop and I wonder who will be coming to feast on them during the winter months? 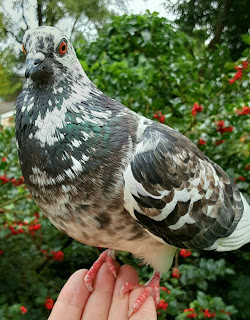 Charlie is also still fairly regular.  The last few years she's disappeared through most of the winter and always missing her anniversary date which I believe is February 27th, Facebook memories help me remember.  All I do know is that this coming February will mark 5 years with Charlie.  That's a great long life for a "city pigeon".  She's a wise bird and avoids the hawks during the cold months. 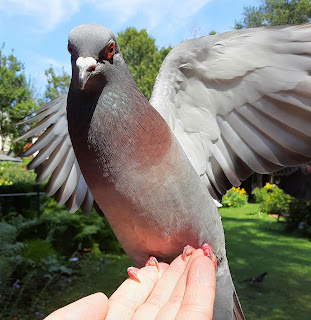 There's one more backyard buddy I should post about, Ripper, who I see for days in a row, then not for days, sometimes weeks.  I always wonder about him when he's not around and then he suddenly reappears.  He's getting a blog post of his own very soon.  Stay tuned for that.  Here's us from this past weekend.  He's awesome! 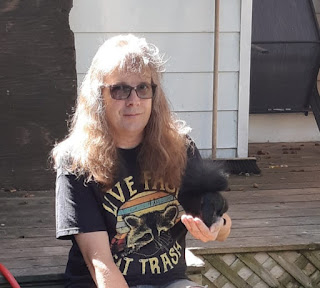 I talk about how I cannot wait to get out of Toronto as it is becoming way too crowded and there is so much development, condos popping up everywhere they can squeeze one in, yet the infrastructure is not growing with the buildings and townhouses (they cannot widen the roads so traffic gets worse all the time).  Then looking back through this blog I am about to post, leaving here will certainly fill me with a lot of sadness too.  Our property is 25' X 177', which is big for the city, definitely attracts a lot of creatures all throughout the year.  People we know outside of the city cannot believe how much we see here compared to where they are.  We make the yard welcoming to them all and more so as the development around us continues.
This isn't really how I wanted to end this blog but with the window open, I can hear machinery from down the road.  Blech.
Posted by Rob at 2:11 PM