The last thing I expected to see at 5:45am this morning. 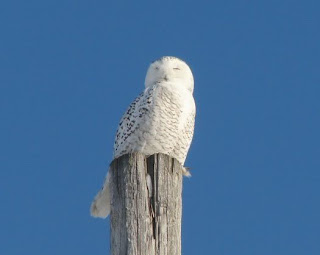 This is probably one of the last things I would have expected to see on my drive in to work today at 5:45am. A Snowy Owl! Amazing. Graceful. So *bleeping* cool! Words are hard to describe, since this is my first sighting ever, in the wild.

At first, I thought I was imagining this massive white bird. He was sitting on a light standard, on the 401 west, less than 1km west of Renforth Drive. I wasn't at full speed yet hitting the 401, but I had one coffee in me already, so I know I wasn't seeing things/dreaming. I slowed down even more, traffic was very light and nobody behind me. A second later and he took flight, the wing spread was huge! He flapped those wings, lifting up off the post, and moved north towards Pearson Airport. There's a lot of field there and probably looking for a mouse or some other small animal. 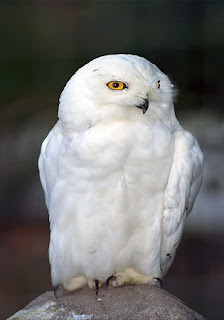 It is funny how there's been more talk of Snowy Owls between myself and a handful of people. My previous blog is proof of that. I've vowed (and hoped) to see one this winter in my travels and it has happened. Not bad for first sighting, seeing him from the car. Next time though I am hoping for a sighting while trekking on foot, with camera and binoculars in hand.

I guess there is more than just cars to keep an eye out for on the 401 (safely). 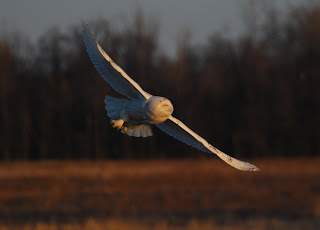 Here are some cool facts I got from AllAboutBirds.Com

- An individual adult Snowy Owl may eat three to five lemmings per day, or up to 1,600 per year.

- The Snowy Owl can be found represented in cave paintings in Europe.

- In some years, some North American Snowy Owls remain on their breeding grounds year-round, while others migrate in winter to southern Canada and the northern half of the contiguous United States. In the northern plains, New York, and New England, Snowy Owls occur regularly in winter. Elsewhere, such as in the Pacific Northwest, the Midwest, and eastern Canada, Snowy Owls are irruptive, appearing only in some winters but not in others.

- Young male Snowy Owls are barred with dark brown and get whiter as they get older. Females keep some dark markings throughout their lives. Young males tend to have a white bib, a white back of the head, and fewer rows of bars on the tail than females. Although the darkest males and the palest females are nearly alike in color, the whitest birds are always males and the most heavily barred ones are always females. Some old males can be nearly pure white.

NOTE: I did not take any of these photos. I had to borrow them from various sites through Google images.
Posted by Rob at 3:43 PM 7 comments:

How Do They Know? 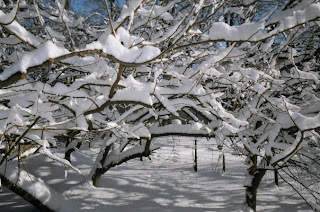 So, Wednesday December 9th, 2009 brought us our first real snow fall of the season. It wasn't the worst one, but it wasn't pretty either. Depending on the area you lived, 5 to 10cm of snow, later rain (lots) or just rain or just snow.

That was the big news of the day; and the day before was warning everyone about the storm rolling in.

I didn't need any sort of news media to tell me something was going to change in the weather. Tuesday afternoon the backyard was so alive with birds and I mean lots of birds! Many species, many numbers of them, and a few species who I've not seen around here for nearly a month. It was all very exciting. 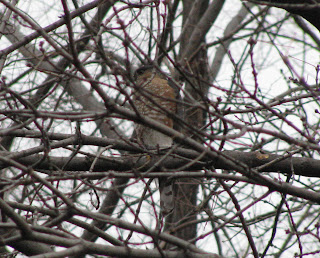 I know I can Google the answer to this, and maybe I will, but another part of me still enjoys the mystery and wonder of what is around us. So, how do they know? How do they know what the weather is bringing? Sure they don't know exactly, like how much snow, but they sure know when it's on-coming. Tuesday afternoon was testimony to that.

So, regardless to what some out there really think... they aren't just stupid little birds and animals. We can learn from the animals around us... if we only stop, look and listen.

One of the main reasons I still do not have cable television in this house. 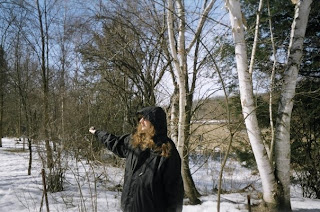