Winter started off rather slow but has February ever made up for it in southern Ontario. After weeks of bitter temps, high winds, snow and ice; Angie and I finally put our foot down last weekend and didn't allow old man winter to keep us locked up for a long overdue dusk walk.

We have a few areas we like to go and normally we don't share our "secret spots". They may not be highly productive like going to some of the more popular areas, but for us, one or two nice sightings and no people is far better than numerous species sightings and being around a lot of people. We aren't truly anti-social but a nature walk is like yoga for us and sometimes we need to turn off much of the world, tune into nature and enjoy some quality time since we don't see each other all through the work week. Plus, more importantly, having undisturbed areas is better for the local wildlife.

It was a short outing, more time spent in one small area watching mammals before dark than a big hike down the trails. It was a mild late afternoon, just before the brutal wind storm came in the next morning. 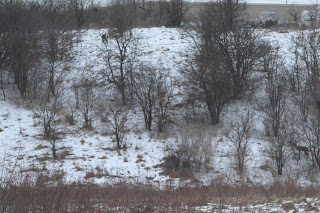 Then Angie spotted a Coyote atop the hill to the east. The Coyote watched us, then tuned into another yelping somewhere out in the field west of us (where the Deer were). 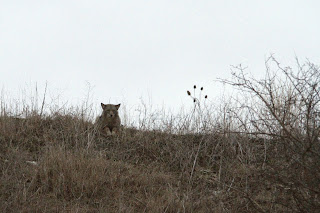 Next Angie spotted 4 Deer running through the field. We assumed it was the Deer I saw, plus another, since they were no longer on the hillside. Their white behinds stood out in the last light. Can you find all four of them? 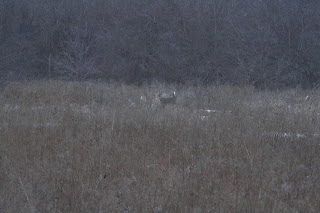 As we made our way back to the truck, I spotted the second Coyote way out there. It was hunting, sniffing the ground, probably looking for rodents. 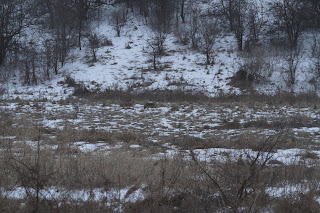 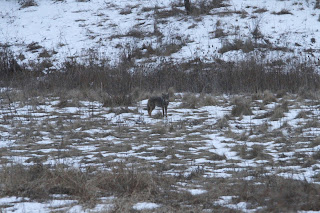 The other stayed up the hill, still watching us, and it's mate. 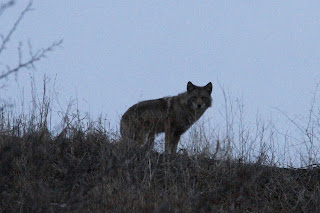 A couple Song Sparrows quickly flew by with that last light, tucking themselves in somewhere for the night.

We both cannot wait for milder weather and more of these walks.

I recently did my first entry of 2019 for my Toronto Nest Blog if anyone feels like some more reading.
Posted by Rob at 6:55 AM 3 comments:

I had thought about doing this blog last week, but out of respect for Dorothy I chose not to. No apologies to anyone stumbling in here not liking Pigeons. Hey, it's my blog, my backyard, my visitors. I live in Toronto and Pigeons are a big part of it. Pigeons and I have come a long way.

Anyway, this bird has been coming around for a number of months, probably since last summer. She certainly stands out in the flock that she flies with. 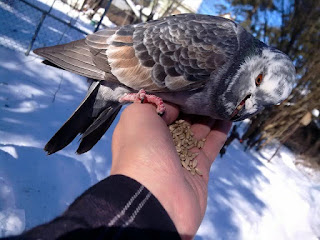 I've always taken notice to her when she is here. She walks around with the others, feeding from the ground and I thought had paid little attention to me.

On Tuesday January 29th she surprised me by flying to our picnic table, looking up at me, and then flying on to my arm. There was no coaxing involved. I was tossing millet to the ground for these birds; none of my hand feeders were present so I wasn't throwing the good stuff down. I know she's been here when Charlie, Fitz and/or Dorothy have been here and obviously was paying attention. I was happily surprised by her actions. I quickly got out the good stuff being raw sunflower chips and she gobbled them up. I gave her another handful. Gone in minutes. Then a third handful. As she ate, I could not help but feel her bones protruding through her skin. Much like some other birds I've befriended in the past, she was a real light weight and probably very hungry. 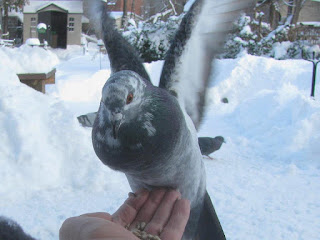 I'd like to think these birds know that I will look out for them, I will not hurt them, and in my hand they are safe from the bullies in the flock. Suddenly there was an alarm call from a Sparrow and the birds were gone in a flash.

She returned the following day, the day after that, and so on right up until Saturday. 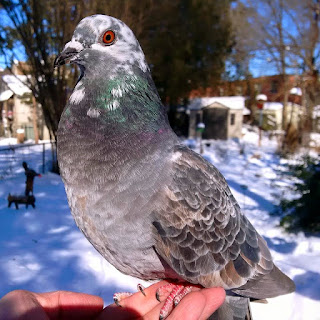 Each time it was in for a good feed and then quickly gone again (they know danger lurks). The visits have been between 12:30 and 1 pm. Interesting how she had a schedule. Breakfast came from somewhere else. I was the lunch spot it seemed. Angie got to meet her on that Saturday and named her Claire (Angie gets to name most of the critters here). 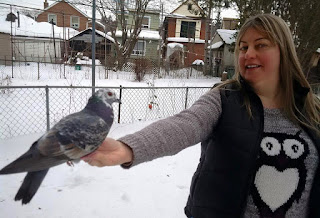 A Cooper's Hawk had been showing once again and the Pigeons disappeared. Four day later Claire returned with some friends. It's been like that the last week. Not daily visits. Just random and early afternoon. She made me miss getting my Tim Horton's coffee before work the first day. That was a bit frustrating but forgiven. I just made sure the following days I was all set to leave for work before she arrived.

Claire is a gentle sweet bird and I hope she's with us for a very long time. 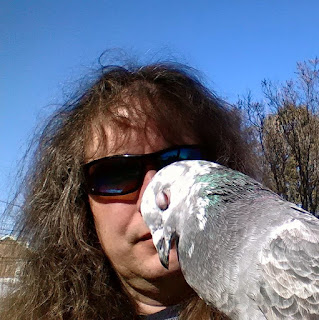 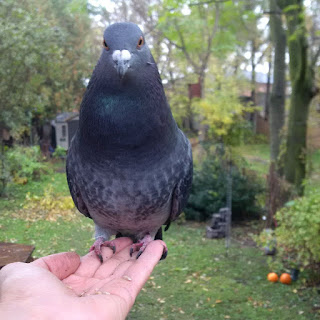 It's with almost full certainty that my friend Dorothy did meet her demise to the Cooper's Hawk a few weeks back. I've seen Fitz and Charlie since that weekend, most of the recognized flock, including Dorothy's unnamed partner. I know the Pigeons have lengthy time outs from the backyard at this time of year but I don't think that is the case here. As you can see, Dorothy's chest feathers are unmistakable, and I am sure I saw that with what was left in the talons of the Hawk.

To most, she was just a Pigeon, one of many; but she was one of my friends. I know this is the way of the wild and I don't begrudge the Hawk doing what it does.

Dorothy was a sweet bird, gentle to me, but carried her own in the flock. She didn't let the bigger birds, like Fitz, push her around. She came into the yard at a good time last year, just weeks after I watched my old flock fly off for the very last time (assuming they had enough of the terror from the Cooper's Hawk). This month would have marked 1 year with Dorothy. 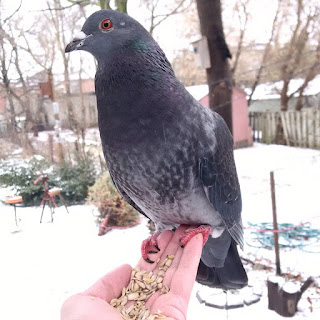 I will be pleasantly surprised if she shows up at the kitchen window again, but I feel it deep down, she won't.

Dorothy, like so many others, has made our backyard a special place. 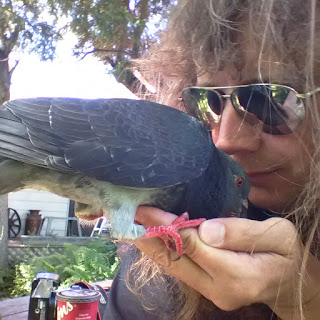 Having a few befriend me periodically is good for my soul. They help me forget the nonsense of the world around us. 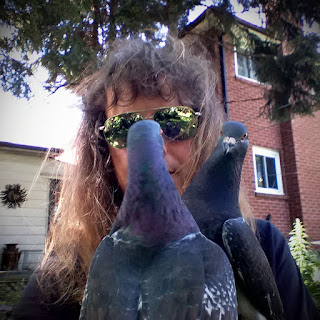 How can someone call her a "flying rat"? 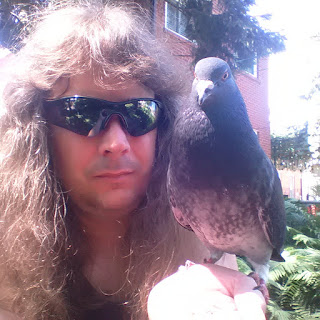 My famous line to people, which I am sure I have posted here in the past, "I always know where I stand with a Pigeon, it's people you never know what you're going to get". 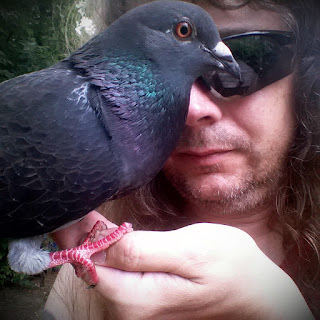 Thanks for your friendship little one, and the memories.
Posted by Rob at 9:06 AM 8 comments: