My last blog of 2018. I meant to get this out weeks ago but tis the season to be busy.

We had a house guest a few weeks back. A Brown Bat. I thought it may have been a Little Brown Bat but apparently it's a Big Brown Bat. I've seen so few bats in decades, shows you what I know. 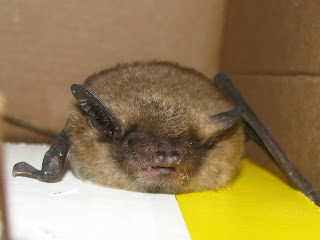 This Bat did not come from our house. A co-worker got a call from his frantic wife about it roosting on the ceiling in their living room. His wife was so freaked out that it prompted him to leave work early and take care of the problem. I had heard about the situation from one of the other guys which made me go find him before he left. I wanted to give my 2 cents on how to catch it, but also what to do with it once it is caught. It's December and the Bat should not just be placed back outside. One of the other guys also stopped him to talk to him about these things too. Our biggest fear was someone hurting the Bat. Bats (of many species) are rapidly declining in numbers. If we can help one, that makes a difference, if not a big impact to his species, at least to his own life.

The catch went rather easily for my co-worker. The Bat did not fly off as he approached. It was a quick and careful placement of a cardboard box over it, and sliding a piece of paper along the ceiling to detach the Bat from the drywall. Done!

I offered to pick up the Bat from his place in the west end of Mississauga. A short drive from work but in the other direction of my home. I knew Toronto Wildlife Centre could help this animal but of course I was already in talks with someone about the whole thing and ensuring he could go there.

My drive home was "fun" as the flasher switch in my truck went along the highway 401 and I had no turn signals. Nothing more to tell here but it added to the adventure.

I gave Angie fair warning earlier that I was probably bringing home a Bat to spend the night in our house. She was cool with it and appreciated the heads up, more so just about me being later coming home, since she would be asleep.

I got home shortly after 11 pm. I brought the Bat inside, still in the box, which is where he was going to stay until getting up to TWC. We didn't want to leave him in the truck as it was going down to -5 Celsius that night. It was best to keep him in a steady temperature while moving him around. We figure because of a spike in the temperature a day earlier, going up to +11, that probably woke him from his slumber. Only he knows how he ended up in that living room.

I put the Bat/box upstairs, closing the door to keep our cats from disturbing him. I had a look at him because I wanted to be sure he was okay, that he traveled well, and also that he was inside. I've had animals die on me in travel. You might recall I once brought home an empty box that I picked up from someone after work. A tiny Golden-crowned Kinglet was supposed to be inside. I never checked the box until I got home because it was after dark. Imagine my surprise and concern when there was no bird.

It was suggested that I hang a towel down the side of the box to give the Bat something to hang onto. I attempted that. It was at the invasion into the box, that the Bat suddenly awoke, and hissed at me. I worried he was going to attempt to take flight, so I quickly covered the top of the box. I slid a towel in the side, hanging it off the edge. I ensured his home for the night was escape proof and then went back downstairs.

I borrowed this image from a Google search. That is pretty much what I saw when he hissed at me. 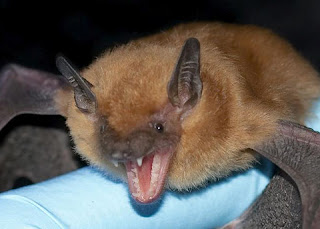 The next morning, right before taking him out to the truck for the drive up to the centre, I checked on him one more time. He was hanging off the side wall, but not on the towel I provided for him. Instead he was hanging on the other side, clinging to the small air holes that were made with a pencil.

Away we went and he is still with Toronto Wildlife as I key this blog. He will stay with them until it is time for his release sometime in the Spring of 2019. The jist of it is he got assessed soon after arriving and then he went to a hibernation area where they keep Bats that have been brought in after being disturbed from their sleep by people, most often accidentally when suddenly found in their homes one day in the winter. I brought in a couple small Brown Bats a few February(s) ago if memory serves me correct. I recently got an update about him, that he is doing well, his weight was excellent, no obvious signs of anything wrong with him, and his story simply was as we suspected.

Another borrowed image from Google. 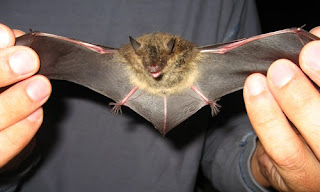 There was some chit chat on Facebook about the Bat through my bud's wife's page. I had a laugh at the many negative comments about the Bat. Most common word used was "gross". There wasn't hatred towards it nor did anyone wish harm. Bats have a bad rap with a lot of people. They are misunderstood creatures. Sure many can carry the rabies virus but they don't fly around looking to transmit it to humans. They serve a great purpose to the environment, eating thousands upon thousands of mosquitoes every summer. Any creature that eats those annoying insects is A-OK in my books. I commented a couple times and my last comment was talking about how different anything my wife Angie said about the whole adventure was compared to these people. She said stuff like "oh, he's cute!" and "can we overwinter him?" She was totally okay with me bringing him home for the night and keeping him in our house. I know I, and the creatures I have helped, are lucky to have her here, and on our side.

The list of temporary house guests grows. This Bat is the latest. Off the top of my head I can run off Downy Woodpecker, European Starling, and Pigeon have also spent the night inside. A Canada Goose, 2 Skunks and a couple Squirrels have spent the night here too, just not in the house. Who knows what will be with us in 2019? I hope nothing but it's good to know our home is always open to them if they need it.

Thanks to everyone who has followed my animal adventures through the years. I wish you all the best in 2019! See you again soon I am sure.
Posted by Rob at 3:30 PM 4 comments:

Ho ho ho! Busy times with the holiday season that rapidly came upon us. I did start a blog but never got to finishing it. Another day in the not too far off future.

All the best to you all, and thanks for following my adventures.

The cats have been a little festive as you can see... 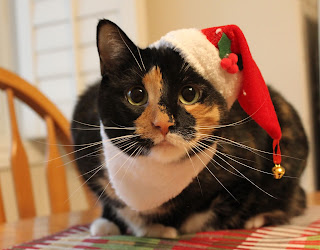 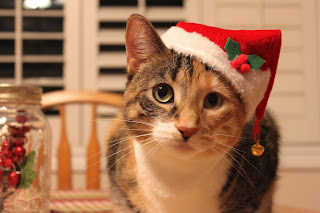 Ripper got in on the action recently. The Pigeons are afraid of my hat, but not him. 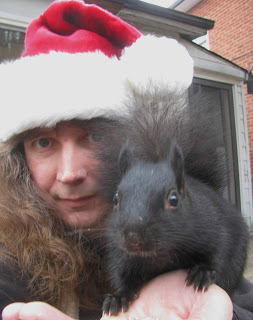 While our Cecropia Caterpillar "Heimlich" sleeps through the winter, we look out to his home daily from the kitchen window, and made it a little festive too. 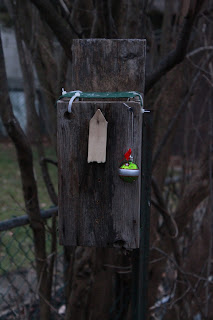 See you all again soon.