Chick-a-dee-dee-dee! Come live with me! 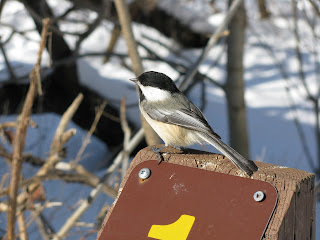 So, the last few weeks a pair of Black Capped Chickadees have been buzzing about the yard and beyond (not so unusual really). The thing is it is nesting season or mating season, whatever you prefer, and they have taken notice to one of the bird houses out back. I find this all very exciting especially since that house has only been out there for four years now and has never had never any residents. I find it funny too because this house was more show out in the garden and not one of the few out there where I really thought a bird might move in.

I asked some questions at a bird magazine web site over their message board. A great place to find answers (usually) from other friends of the feathered. Google was a big help too... gotta love Google.

It seems the Chickadees will excavate a number of nests for a short bit until they decide upon which one is best for them. Where does my bird house stand in this all? I have no idea. It is such a tease watching them arrive daily, play in and out of the house for up to two hours at a time. I guess in the coming weeks we will find out for sure. 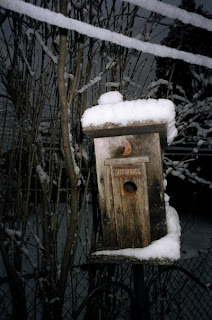 They don't like the camera much when around the house. So, getting one good shot of the action has not happened yet.

In the coming weeks I will let you know if we have new neighbors. 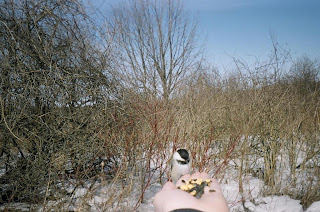 So, I posted this photo on Facebook the other day. I also made mention of them including a link to some small tid-bits on this species of bird. It seems to have raised a bit of a stink because they do have a bit of a bad reputation when it comes to nesting or rather "egg laying" by leaving their eggs in another birds' nest and have that other bird raise their baby. Call them mean. Call them lazy. You cannot deny they are clever.

The most interesting is their "mafia style" to ran-sack a nest where they dropped an egg which got rejected by the other family of birds who knew it was not one of theirs'.

Anyways, don't hate the Cowbirds, it's just what they do. Here's some further info on this species of bird that you may find interesting. Enjoy!

They occur in open or semi-open country and often travel in flocks, sometimes mixed with Red Winged Blackbirds (particularly in spring) and Bobolinks (particularly in fall), as well as Common Grackles or European Starlings. These birds forage on the ground, often following grazing animals such as horses and cows to catch insects stirred up by the larger animals. They mainly eat seeds and insects.

Before European settlement, the Brown-headed Cowbird followed Bison herds across the prairies. Their parasitic nesting behavior complemented this nomadic lifestyle. Their numbers expanded with the clearing of forested areas and the introduction of new grazing animals by settlers across North America. Brown-headed Cowbirds are now commonly seen at suburban birdfeeders.

This bird is a brood parasite: it lays its eggs in the nests of other small perching birds, particularly those that build cup-like nests. The Brown-headed Cowbird eggs have been documented in nests of at least 220 host species, including hummingbirds and raptors. The young cowbird is fed by the host parents at the expense of their own young. Brown-headed Cowbird females can lay 36 eggs in a season. More than 140 different species of birds are known to have raised young cowbirds.

Unlike the Common Cuckoo, it has no gentes, whose eggs imitate those of a particular host.

It seems that Brown-headed Cowbirds periodically check on their eggs and young after they have deposited them. Removal of the parasitic egg may trigger a retaliatory reaction termed "mafia behavior". According to a study by the Florida Museum of Natural History published in 1983, the cowbird returned to ransack the nests of a range of host species in 56% of the time when their egg was removed. In addition, the cowbird also destroyed nests in a type of "farming behavior" to force the hosts to build new ones. The cowbirds then laid their eggs in the new nests 85% of the time.

This is the male Brown Headed Cowbird... 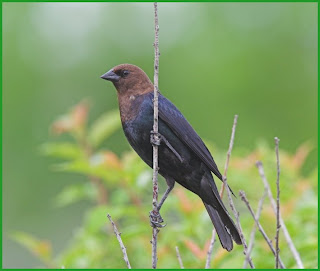 This is the female Brown Headed Cowbird... I have 3 pairs about the property right now yet as far as I can tell there are no nests on the go suitable for the Cowbirds. I'd hope for them to stick around for the summer, as any insect eating birds on the property are definitely welcomed.
Posted by Rob at 10:28 AM 3 comments:

I never thought there was such thing as a good fire!

Imagine walking through one of your favorite parks/forests and as you come up a hill you smell the after-math of a fire. It's not overwhelming by any means but your instincts tell you that it definitely was not a family BBQ. You get to the top of the hill and pictured below is what you see... 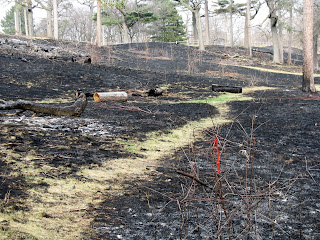 The first few moments I am in a state of confusion. It's blackness about the ground for some distance, lots of ash and burnt foliage (don't know how else to describe it). I don't pay attention to the trees being barely touched by the fire. I also ignore that there is like a path going through the destruction. I've not seen anything like this before... and I don't understand it. I have my camera with me and I start taking pictures. I know as soon as I get home one of the first things I will be doing is trying to Google what exactly happened here in a very southern part of Lambton Woods. I need to know! 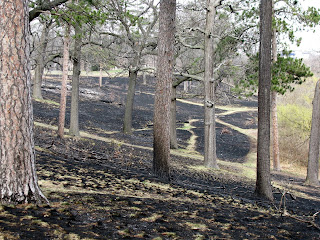 I walk about the grounds, taking in the view and pick my brain on the how's and why's of this. After the shock of it, reality sets in that this was a deliberate and controlled fire but I still had no idea why it was set.

Much to my relief on the way home we pass a notice stating the fire was to be set by the City of Toronto. It is part of the protection and restoration of a Black Oak Savannah... something I have never heard of, and will look into it further, as the posting also states it is one of the most endangered ecosystems in Ontario and one of the last in Toronto. 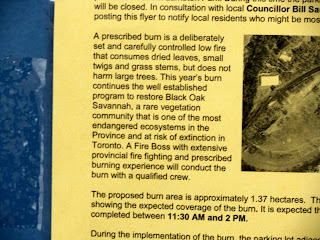 So yes, I will do some study on this further... always good to learn something new that I have interest in, and see if there is something further I may do, or get myself involved in to help with the restoration and preservation of this part of the Lambton Woods. One of my absolute most favorite places within the city to get away from it all and see lots of wildlife. 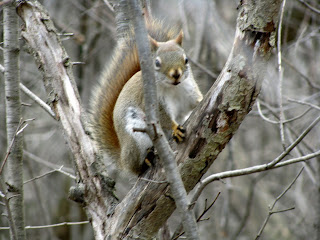 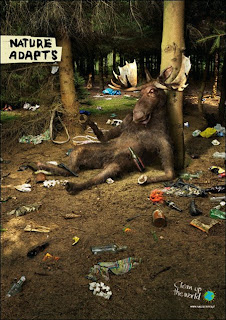 So, I blog about the mess of a wetlands area not too far from me the other day and lo-and-behold this coming Saturday appears to be "Community Clean-Up Day" about the city.

I know I don't watch television, I don't read much in way of newspapers so a guy like me can be left in the dark about such an event. It's nice to see that such a thing exists, although I do recall it in previous years now that I think back. I guess I need some kinda advance notice?

So, while I am not organized to get a group together and tackle an area; I plan on making an extra effort to pick up some trash here and there about my journeys over the next few days. I've got some latex shop gloves ready because who knows what I am going to find. 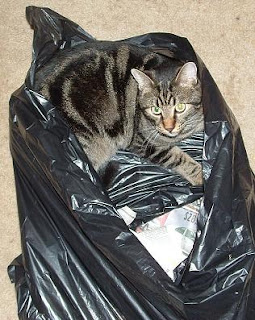 In a city this big, it will feel like a losing battle to try and make a dent; but in the end, I will know every little bit counts. Perhaps curious on-lookers will take it all in and continue where I left off?

Others have been doing this long before and for no reason other than to help keep their neighborhood or favorite park clean... they didn't need the city to tell them "This is 'Community Clean Up Day'... please help out". Kudos to them all... 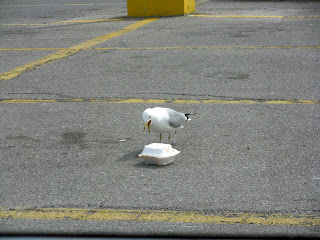 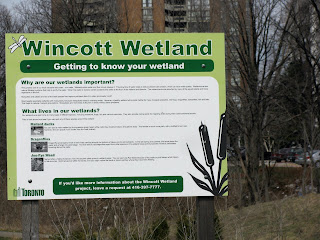 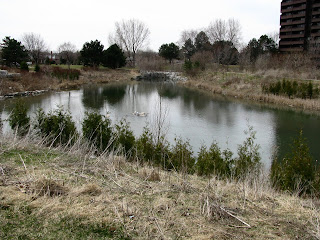 Over this past Easter weekend, we ended up at a local man-made pond called "Wincott Wetlands" which many creatures have taken up as a seasonal home. Despite the garbage about the grounds these Mallard Ducks, Canada Geese, Red Winged Blackbirds, Mourning Doves and Common Grackles still reside here. It is awesome that the city and community came up with this great idea to have a nature setting developed where one was not before, a big (and once) beautiful pond; but shameful at the same time as it seems nobody comes around too often to give it a good clean up. I know after the snow melts anywhere, garbage is found in abundance... cans, plastic bags blowing around and whatever else. This place though... rusted steel tire rims, a mattress, a shopping cart stand out more than anything. 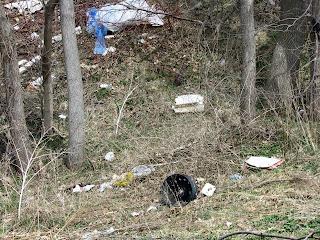 I am curious if there is a community clean up day? While this settling is not exactly in my community (over by my parents'). I'd probably step in with a group of people and take action for an afternoon... not for the surrounding residences by any means, but for the wildlife of course. 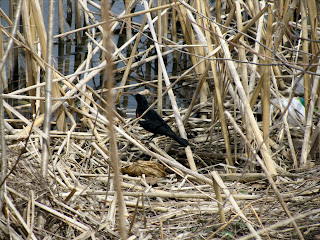 I guess that is life in the city and as with humans, the animals also learn to adapt. It is unfortunate that while they did not make the mess, they are the ones who must live in it. Would the people of the area like to live in such a mess? Probably not, but then again, you never know... 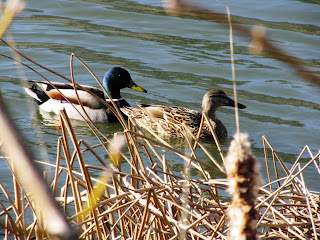 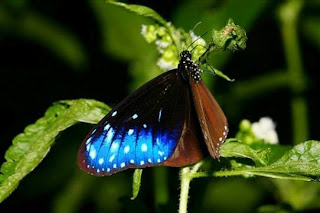 This one is just a shorty. I wanted to acknowledge this... great job to Taiwan in their on-going efforts to help preserve the Purple Milkweed Butterflies during their migration across the country. It seems part of their path is across a highway and in previous years hundreds die at the windshield of speeding cars. They have constructed a large netting system across this migration path. The net does not trap the butterflies but forces them to go up and over it, above the height of the traffic.

To many a butterfly is just another *bug*