I've been wanting to blog, especially ever since Gulliver and I were blogged about in BlogTO but with not getting out much, what is there to blog about?  Anyone following me knows about Gulliver as well as the eastern screech owl that has been using one of our backyard owl boxes.  But did I ever release his name given to him by Angie?  She names most of the critters. 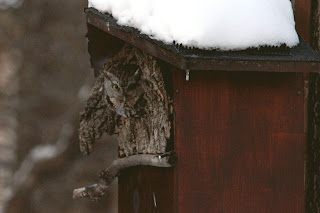 Little Al has been staying with us for the most part for 2 months now.  He's been an exciting distraction from all the stresses of the world these days.  We don't always know when he is here, when he is going to pop his head out of the box, and that all makes for a fun mystery.

I've had my trail camera pointed to the box some nights and only once did it capture him going in.  So many times he has eluded capture on the cam as he left the box at dark, or came in just before daylight.  I was beginning to think that there was something wrong with the camera; but it would seem he is just that fast, too fast for the shutter.

The one time I got him on the camera going in. 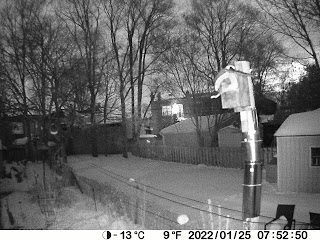 The cam picking up two distant raccoons.  So yes, it is just that he is too quick. 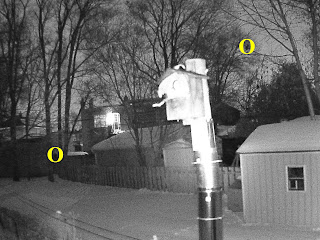 Still, setting up the cam and hoping to catch him has been entertaining for me.  Especially on the weekends when I am home for 2 full days and I see him rise around 5 PM yet knowing the camera did not get him coming "home".  I'm saying to myself  "you sneaky little owl".

We've had 40+ minute showings of him some evenings and other times it is less than 10 minutes from his first moments at the edge of the box until he flies off for the night to hunt.  Another fun filled bit of wonderment.  Will he show and for how long?  I'm glued to my chair at the kitchen window both Saturday and Sunday evenings, just watching.

Angie had an epic moment watching him last Thursday.  It was before 5 PM when he stuck his head out of the box.  He was already alert and watching the yard around him.  He began focusing on the holly bushes down below.  At first Angie thought he was watching our regular visiting robin who feasts on the holly berries but as the robin left, the owl was still watching the bushes.  According to Angie, in a flash, the owl flew out of the box, diving down to the bushes and in one swoop grabbed a house sparrow and took it back into the box (to eat of course).  Angie could re-tell this sighting better as I was at work and read her excited texts to me with total envy.  She got to witness something that very few people out there have ever seen...  an eastern screech owl make a successful hunt.  As envious I was, I was very happy for her being able to see this.

Here we are a few days later and I guess I have a bit of payback of my own.  I asked Angie to wake me before she went to the office today as I had an early doctor's appointment.  So I was out of bed by 6:30 AM.  I smooched her goodbye and put the kettle on.  I figured while I was waiting for the kettle to boil, that I would step outside and fill the heated bird bath.

It's pitch black outside but the bath is only 20 or so feet from the deck.  I'm still half asleep and my eyes aren't focused to the darkness outside.  It's quiet out there, no morning rush hour traffic from the main road happening.  Then I heard it...  the trill of an eastern screech owl.  I got goose bumps!  I fucking love that sound.  YES, emphasis is need to express how much I love love LOVE the trill sound from these owls.  I look up and there is Little Al at the box, trilling away, looking out across the yard.  I filled the bird bath and then backed up to the deck steps where I then just sat myself and listened to him call for a couple minutes.

I was cursing having to go get in the shower and be out of the house within an hour to go to the doctor.  I should have reminded myself that this wasn't going to last all morning so to not be so hard on myself about it.  I went inside, grabbed my camera and tried some night shots from the deck.  I should have grabbed my tripod but really didn't have the time.  I think I did pretty good with this picture I got of him in the dark.

I have a few really nice photos of this owl so I am not trying for them much any more; but a couple times recently I have made some attempts at these darkened scenarios as I have many after dark owl encounters every winter because of my work hours.  I got this "new to me" used Canon 7D camera body which I haven't really mastered in these no light settings.  Remember, you do not use flash on an owl.  You wouldn't want a camera flash in your eyes after dark, it's way worse on an owl.  So I use manual settings, tweaking the ISO and adjusting whatever the other settings are called.  This is how bad I am at technology, I don't even know what some of the settings are called that I am adjusting.  So ya, don't ask me for lessons.  HAHAHA!

I got in the shower and by the time I got out at 7:10 AM, he had tucked himself inside for the day.

Anyway, I guess Al is calling in a mate, or trying to.  Anyone have a thought about this?

I should add that we don't really know if he is a male or a female, we just say "he".  Some have really had an issue with this sexing of the owl, and some of my pigeon buddies.  Does it really matter?  I've had people claim the opposite sex just by looking at a photo of one of these birds.  How anyone can sex a pigeon or an owl by a photo is ridiculous in my opinion.  There's no difference in appearance with owls; it's size and weight that can lead to sexing.  And with pigeons, forget about it!  So many colour variations.  For me, it's when I see my buds, um, doing the deed, that I really can sex them.  You know, who is on top (or bottom).  Okay, getting off topic.

Funny thing when I was at the doctor, I told him about my morning.  He got rather interested, stating he's seen an owl and didn't think they were in Toronto.  He asked if I had a photograph on my phone to show him.  Of course I had a photo and of course I showed him.  He thought it was pretty cool and loved how the owl blended in with the bark on the exterior of the box. 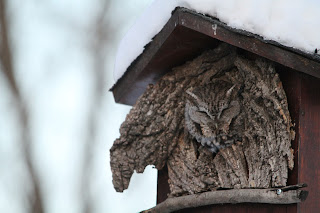