Seventeen. Just a number but one that seems to stand out amongst the rest to me. Why?

So, yesterday when I saw my 17th Snowy Owl of the season, somewhere in the back of my head I just knew this one was going to be special.

I knew the Snowys were still around this park as I had been noticing some steady reports. It was a cold sunny morning, I felt like getting out for some air and thought I would re-visit the area as I hadn't been since before Christmas. I walked the park and drove some roads within over an hour or so and didn't see much more than a couple Red-tailed Hawks. 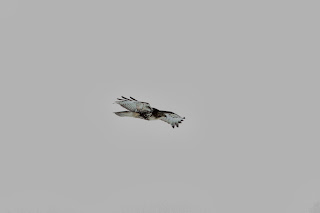 I was walking back to the truck when I noticed a school group down the path with a nature interpreter who funny enough I knew in the online world as we had communicated a couple times in recent years about birding in the park. He had a scope and was showing the excited group of kids a Snowy Owl in the field. I couldn't see the bird from my point of view due to the snow mounds.

The bird took flight and the group continued their walk along the path in hopes of spotting it again. It was at that point I met the group, got talking to Johnny about the sighting and asked if I could join them in their search for where the bird went. He said "of course" and here is where we introduced ourselves and discovered we communicated in the past.

It wasn't very long before we spotted the Owl on a small hill not far off the path. It was a very active bird, which Snowys can be during the daytime hours. I've seen it over the years. Nobody was stepping off the path, one out of respect for the bird, and secondly in most spots, the snow was knee deep to an adult, much worse for a bunch of grade sixers. 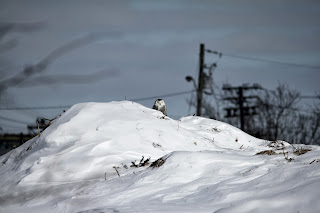 A line of trees grew just off the path and we found a few openings where there were no branches obstructing our view of the bird. Johnny set up the scope for the kids again and I was able to take a few shots. The Owl clearly was hunting. It was constantly on the look out in all directions and sat there over the next 5 minutes or so while the group of kids all took turns seeing it through the scope, although it was in very good range that even binoculars weren't necessary; but the scope sure brought it in with all the detail of the heavy barring on this young bird. And with all the heavy barring is how I figured it was different from the previous two Owls I had seen back in December (they weren't heavily barred).

The kids were all in high spirits seeing this arctic species. Everyone loves a Snowy Owl! A few marveled at my 500mm lens and asked if they could see the pictures I took. I obliged and they were like "ooooooooooooo", "ahhhhhhhh" and "sweet shot". One boy's father was present and he was just as excited as all the kids. A lot of comments were made by the group about seeing the bird but the one that stands out most is "this is the best day ever in my whole entire life!" by one young boy.

My paranoia and concern for Owls is high; but little by little I am finding myself entrusting to more people especially with Snowy Owls in Toronto. A large bird, often out of reach of peoples harassment as they hang out in marinas, airfields, etc. Although I've seen a few who've gone beyond the point of common sense and even their own safety to see the birds up close, which end up in failure anyway as they flush the birds, like walking across the ice of Lake Ontario to get at a dock in the marina for a better view.

It's really great to see the joy in others viewing these Owls, especially for their first time. The smiles that come out of them is awesome to see. It almost brings me back to the day Angie and I saw our first Snowy Owl less than 5 years ago.

As the group gathered up and prepared to head back to the centre for lunch, a couple of the kids took notice to my Pepsi winter jacket (in my work duds). One asked if I worked for Pepsi. I said "yes". He and his friend said loud and proud "We love Pepsi! Coke sucks!" I laughed and said "thank you". We parted ways, saying goodbye and they went one way, while I went another. Word was another Snowy was just over a ways and I thought I would try to scope it out since I was full of life and adventure seeking after this moment.

I came up empty and was on my way back to the truck when I noticed the Snowy in the same area, only on another small hill closer to the path this time. 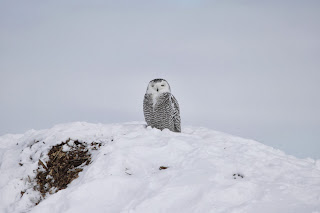 Of course I had to stop and try for a few more pics. Such a decent range and a very natural background.

A couple minutes later, I guess he got tired of me in his surroundings, and he took flight. 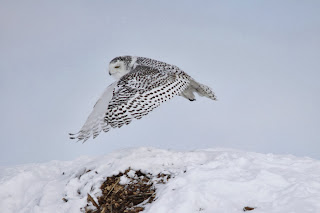 Look at that wing span! 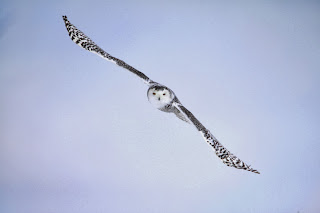 He flew almost over my head and headed to the west, landing atop a rather large hill on the other side of the path. I could just see his head from where I stood.

I stood there for a moment in awe, gave a silent "thank you" for all that I saw this morning and went on my way. Another school group was coming up the path now. I assume they were told about the Snowy Owl and were on their way to hopefully see it.

Somewhere between them and I, a small brown furry creature dug out of the snow bank and was running along the path. Too large and dark for a mouse, or any that I've ever seen us get in the house. I'm told it is a Vole. I know rodents make tunnels beneath the snow as they live through the winter and hunt for food. I guess this guy came out in hopes of snagging some bird seed tossed on the paths by people during their walks? 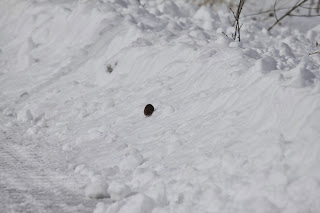 Before I knew it, in the corner of my eye I see the Snowy come swooping down the hill, grab the Vole and carry it off. I almost dropped my jaw and my camera. Some of the group on the other side of this action saw it for all the super fast split second flash it was. The Owl carried it's catch in it's talons just across the field and rested on a snow mound. 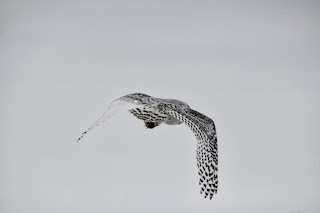 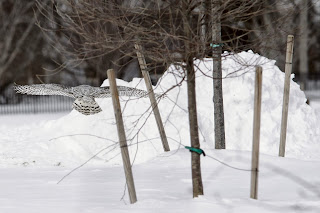 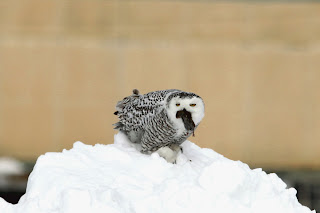 Incredible, amazing and some f-bombs added for the needed emphasis of what we just witnessed. Plus, this shows the hearing and sight capabilities of Owls in general. I could barely see the little rodent and I was much closer than the Owl was.

This group of kids excitement level wasn't nearly as high as the previous. I think it could be chalked up to the group leader plus these kids were much younger. They didn't have the passion that Johnny had and the kids seemed to pick up on that. They all looked at the Owl, including some mothers attending this venture, a few comments made but everything paled in comparison to the previous group. We all left the Owl to his lunch, I believe the group were going for theirs, and me for mine at home before work.

I was grinning all evening and telling a few co-workers about the experience. One said "I feel like I was right there" with how I went on.

I've seen a lot of Snowy Owls in the last couple years. 13 in 2011's irruption. 17 to date with this irruption. Most times the birds are just chilling out. Sometimes I see them fly. I saw one feasting on a Gull in Bronte Harbor. But this is a first for what I have shared, and it was all natural. I feel very blessed and won't forget this outing anytime soon. Maybe 17 should be one of my lucky numbers on the days I feel like playing some numbers?

If you live in Southern Ontario and have not seen a Snowy Owl yet... what are you waiting for? Check eBird or just get out for a drive and have a look, you might just get lucky. 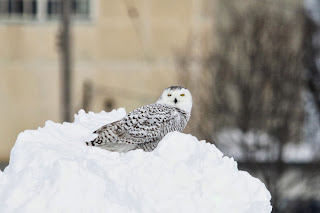