Late in 2021 a tail-less Virginia opossum was appearing on my trail camera.  It was sometime in October that I first noticed her. 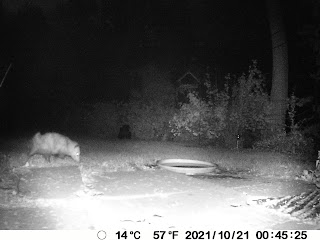 Any time after that first cam capture, I was happy to see her again.  Even with run ins with massive raccoons, she kept visiting. 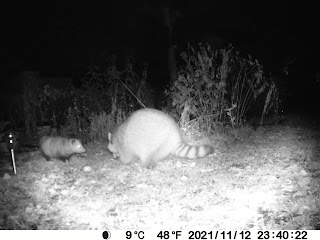 Even as the temperature dropped and the snow was staying on the ground in late December, she was still coming around.  I had set up a small shelter down back that she sometimes used, or it was used by another like in the shot below (that's her in the forefront).  She disappeared after this night.  I kept looking out for her but she wasn't coming around.  I never forgot about her but the hope to see her again faded as we moved through the winter months.  As you may know, opossums are wanderers and I assumed she did just that, wandered off despite having food and shelter here 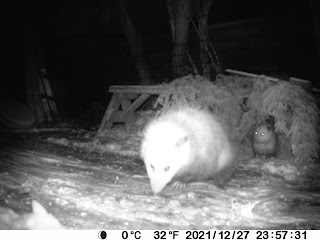 Then surprisingly she returned about 5 months later.  I wondered where she had gone for all those months but was very happy to see her back.  While we never named this opossum, she became one of the stand out individuals of the backyard. 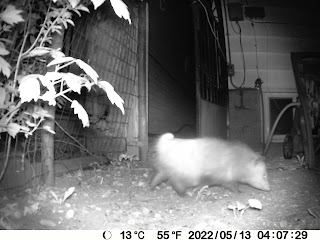 Funny thing as time passed, the captures of her on the camera showed her belly getting bigger and actually dragging along the ground. 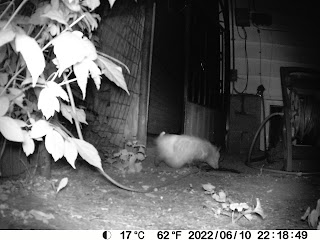 Here she is with another not that you really need a comparison. 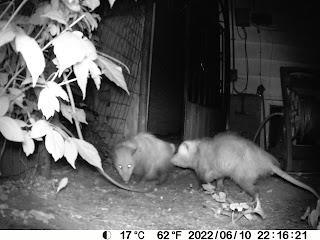 Seeing this "development", I knew she was either pregnant or carrying young in her pouch.  I spent more time watching out for her, both with time spent out back after work, and as well as keeping the camera set up near the gate to our backyard.  I was fortunate enough to see her with my own eyes one night and I took a very short video.  Please give this a view, it's only 6 seconds.  Look at that waddle!

I threw her part of an apple, to which she took, and then I went into the house.  As much as I loved seeing her, I am confident the feeling wasn't mutual.  The trail camera was set up for the night.  Look at what the cam caught 90 minutes after I saw her. 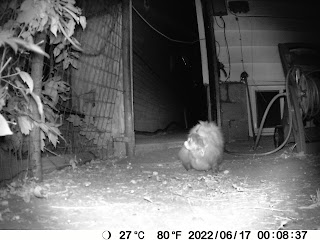 Holy shit!  That's a baby opossum on her back!  Here is the image cropped. 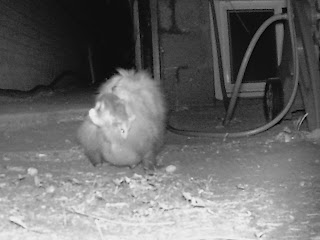 This is something that I have always wanted to see with my own eyes, a mother opossum carrying a baby (or babies) on her back.  I borrowed this image from a quick Google search, helping some of you understand why I would really like to see this... 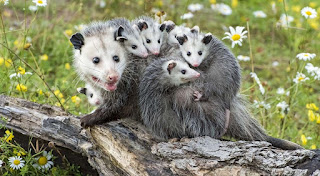 Seeing this on the cam, and so soon after I saw her for myself, drove me nuts (in a good way).  Believe me that the next week, I was spending a lot more time sitting outside after dark, quietly, waiting.  I never got lucky to see her for myself.  A couple nights there was teasing captures as she came in for a drink but then would turn around and leave back up the walkway, and I wouldn't see much of her from the shots. 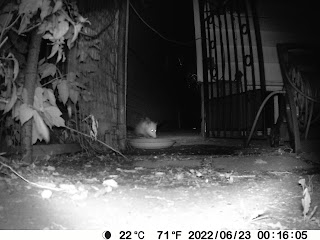 Of course another opossum was coming around more now, and I even saw him for myself too.  Don't it figure?!?! 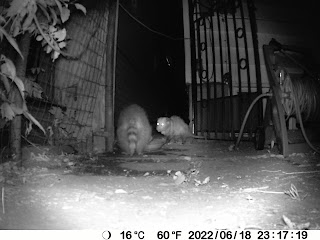 What was he seemingly snarling at through the gate? 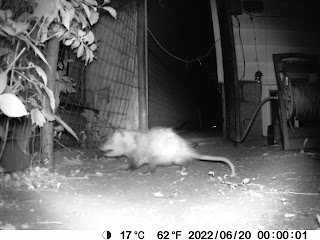 Another short video you can see if you are on Facebook, I made the link public.  This happened one night as I sat on the deck steps waiting.  I was initially excited to see this opossum, but not as much once I realized it wasn't her; then I just got back into the moment and see him nonetheless.  Opossums are awesome!  Link here.

This past Saturday I set the camera up in another spot, right along the path between our house and next door's.  Look who finally showed up again.  Mom-op! 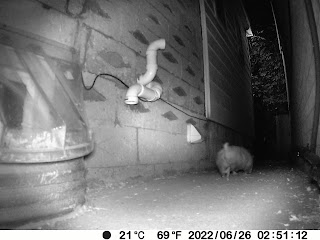 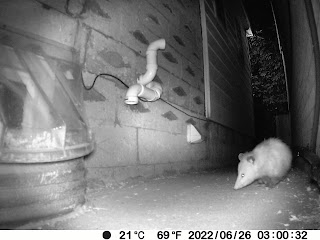 I think she looks thinner.  What do you think?

I'll be keeping watch, but that's what I do 365 days out of the year anyway.  This was probably it for 2022 (I cannot believe July is just days away).  Knowing we had one out there is almost as cool as seeing it.

We do all we can to make our property more inviting to the wild ones.  2022 was our best winter for having a screech owl here, a raccoon had her babies in our dog house this past spring and now this opossum.  Not that I am giving up on this opossum wish, but I do wonder what may be next?

I hope her babies are ok but I know nature is cruel sometimes! Great postn

Great read Rob. Fascinating account and hope she and her young are okay. It’s a tough ol’ world out there for critters.

I've never seen one! What a treat for you!
(ツ) from Cottage Country , ON, Canada!

That photo of her with one baby is precious! Glad you were finally able to at least capture that much. :)