I think of all the Owls I have seen in my journeys the last couple years; I would have to say my favorite Owl to see, hear and yes, take a few photos of is the Eastern Screech Owl.

A tiny Owl compared to the likes of the many Snowy Owls I encountered this past winter.  Size is comparable to the American Robin.

I love the fact of how well they blend in with their surroundings.  Sure most Owls do but I swear the ESO can pick a tree that color matches it's own body.

Take this "red morph" Screech Owl.  Could it pick any better of a spot to hang out? 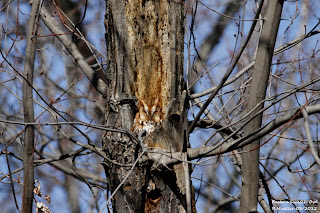 How about this "grey morph"? If his eyes were closed, he'd surely disappear into the bark of the tree. But he is one of only a couple I have ever heard trill. And is the only one I have watched trill. 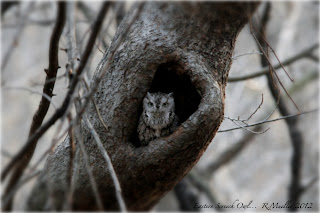 Seeing such a bird is amazing! And I love the one of a kind natural settings Mother Nature has to offer us in our travels. No two trees are truly alike. And with my more than respectable distance from the Owl, you see him above unstressed and undisturbed. He is well aware of my presence but continues his eerie song.

Take a look at this Screech Owl. I'd swear that cavity was made just for this Owl. A few of the other local birds (American Robins, Black-capped Chickadees) were on high alert and stopped me in my tracks to scope my surroundings and eventually spotted this guy. 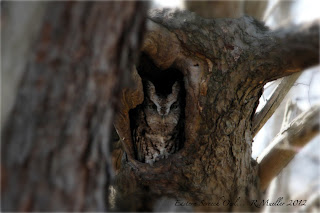 And lastly, a photo I have shown a number of my friends. And it took some a bit of time to realize that they were looking at more than just a tree in the shot. 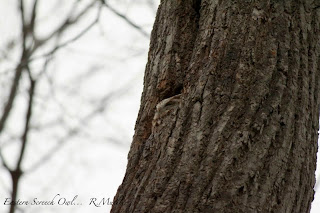 Yes, Eastern Screech Owls are the "Masters of Camouflage"!

I don't have a "regular", as in known resident Screech Owl in my area. I've seen them, some even more than once, but haven't actively pursued any to the point of discovering a nest. I pass some of these cavities again throughout the year and wonder if he/she is in there sleeping away?

Here are some cool facts about Eastern Screech Owls (borrowed from the Cornell Lab of Ornithology page). I've linked it as you can see. And if you have a moment, check out the sound bit on this Owl.

Like most raptors, male Eastern Screech-Owls are smaller than females, and are more agile fliers and hunters. The female doesn’t hunt while on the nest; she and the chicks depend on food brought them by the male. Though the male is smaller, his voice is deeper than the female’s.

Smaller birds can help you find screech-owls during the day. Listen for a commotion of Blue Jays, chickadees, and titmice—they may be mobbing a screech-owl (or other raptor), swooping around it with noisy calls. This can be enough of a nuisance to make the owl move on, and it alerts other birds to the predator’s presence and teaches younger members of the flock about the danger.

Screech-owls regurgitate the bones, fur, and feathers of their prey in an oval pellet, usually once or twice a day. The ground beneath habitual owl roosts can be littered with pellets, and you can learn a lot from them about the owl’s diet. However, data from pellets may underestimate the number of soft-bodied animals, like worms and insects, the owl has eaten.

Nestling Screech-owls fight fiercely among themselves for food, and sometimes even kill and eat their smallest sibling.

Eastern Screech-Owls of the suburbs may fledge more young than their rural counterparts, probably because their predators are scarcer in the suburbs.

Red and gray individuals occur across the range of the Eastern Screech-Owl, with about one-third of all individuals being red. Rufous owls are more common in the East, with fewer than 15% red at the western edge of the range. No red owls are known from southern Texas, although they occur further north in Texas and further south in Mexico. Intermediate brownish individuals also occur in most populations.

Eastern Screech-Owl pairs usually are monogamous and remain together for life. Some males, however, will mate with two different females. The second female may evict the first female, lay her own eggs in the nest, and incubate both clutches.

The Eastern Screech-Owl is known to eat a variety of songbirds, including the European Starling. Despite this fact, the starling regularly displaces the owl from nesting sites and takes over the hole to raise its own brood.
Posted by Rob at 8:42 AM

Love these photos. My kids got a real kick out of the hidden secrets in the trees! You are so lucky so have taken these photos! Do you camouflage when taking them?! We saw an owl fly right past us in the Rouge Valley park. Have you ever been there. It is quite extensive, but worth exploring. You can park at Reesor and Steeles, or at Twyn Rivers.

I am the picture editor of a german science magazine. We are interested in publishing one of your pictures of owls.
Can I contact you via email somehow?
Thanks,
Petra

Look forward to hearing from you.