Getting Ready for the Bluebirds!

This past Sunday I joined some fellow members from The Ontario Eastern Bluebird society for a trip about part of Bronte Creek Provincial Park. The purpose for the trip was a maintenance check of the nest boxes, see what needed cleaning out, what needed some repair, and see if any nest activity had begun yet.

We were doing the east side of the park. The team, who looks after these boxes, did the west side of the park earlier in the week. Their find was one nest on the go already. And I hope it's survived what must be old man winter's last throw of snow and cold temps at us until next fall.

I had never been out with this group before, nor really done much trekking about this side of Bronte. We visit a couple times a year, we have our spots we frequent, and never go out of what we know because the park is quite large. So this was a good way to get to know more of the park, and some people I've briefly met at the OEBS general meeting(s). Unfortunately Angie could not join us because she was not feeling well. 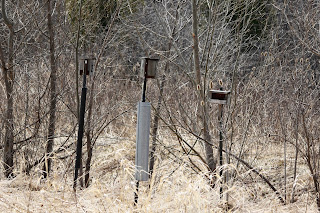 The houses were in good condition overall. One contained the remains of a "dummy nest" that a House Wren threw together last Spring. That was removed. And I learned what the feeding station was for. Yes, feeding of course. But the OEBS only puts food (meal worms) on the platform through the early part of Spring, if Bluebirds are around. Why? The weather is unpredictable, as like this year, winter still comes back to haunt us some days, and natural food sources of insects are almost non-existent. I'm all for that because after all we feed our birds all year but come Spring when the Robins return, they need other things than seed or peanuts, and we are happy to provide them with meal worms and left over blueberries.  FYI...  Bluebirds being a Thrush species like the Robin, feed on the same things.

I should introduce the team, eh? There's Sylvia and Bert for starts. Sylvia bands the chicks about the park. And on these trips she makes records of everything they come across on the maintenance walk. A lot of things they try to get at right then and there, but if something needs a little more work, and they must come back... Sylvia has documented it all down. Her husband Bert opened up all the boxes, gave them a good cleaning, and he maps out the boxes for future reference, who is in what box, be it a Bluebird, Tree Swallow, Chickadee. And then there was Tom with them whose main objective on this day was to grease the poles in order to deter predators like Raccoons and Snakes.  Tom had his own Bluebird trail in the past before he ended up selling the land. I followed behind with a lady named Joyce, who is also a part of the South Peel Naturalists Club and a member of the OEBS. She is a wealth of information, not just about the Bluebirds, but birds in general, here there and so many places about Ontario. She shared many stories with me in our travels, and was kind enough to pick me up at a car pool spot to save on park admission (and gas).

It took us just over 3 hours to inspect all the boxes. In my head, when I heard of "Bluebird Trail", I had envisioned a line of nest boxes along a fence, or edge of a field. So I was surprised at first to find two boxes here, drive a bit and find two more boxes, go a bit further and find another two, and so on. There was only one spot where there was a single box which was soon to have a second one set up nearby. Having two boxes close to each other ensured a Bluebird got one box (hopefully) and a Tree Swallow would get the other one. I learned some time ago that two Tree Swallows would not nest next to each other unless it was absolutely necessary (desperate, lack of nest boxes). So this helped give the Eastern Bluebirds a better chance at nesting successfully without disturbance from the Tree Swallows. The nest boxes are set up in open areas more favorable to the Bluebird and less likely to attract a House Wren. Sadly, as time goes by, suitable nesting spots for the Bluebirds are growing over, making them more House Wren friendly. The boxes either must be placed elsewhere or the members must seek permission from the park to do a little bit of grounds work around the boxes, clearing them up some and making them more open for the Bluebirds.

I kept hoping through the trip we'd see a Bluebird. At one point apparently we did, but with the hard sun in front of us, I couldn't make it out until it flew off. We enjoyed all the birds we saw and/or heard; and actually accumulated quite a species list. Birds like Song Sparrow (there were many about), Field Sparrow (didn't see but heard them in many spots), Tree Swallows a plenty at every nest box location, Blue Jays, Chickadees, RWBBs, Grackles, Brown-headed Cowbirds, a couple Killdeer, Robins at every turn, Flickers scattered about the park, and heard the sound of a few Red-bellied Woodpeckers too. A few small flocks of Gold and House Finches were also seen. I saw my first Ruby-crowned Kinglet of the season as well as a Yellow-bellied Sapsucker. Lots of Turkey Vultures glided and circled over us. One Red-tailed Hawk. And an Osprey! Another first of season for me. The Osprey put on a lovely show over our heads for a brief moment. Here's a few pics of the birds, none are frame worthy by any means, just record shots for the blog.

So many Song Sparrows about the trek. All singing away. 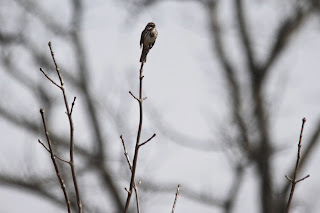 Highlight was this Yellow-bellied Sapsucker. 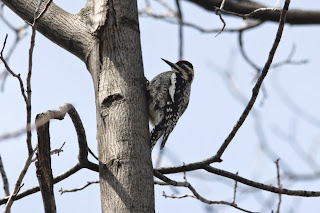 Then again, the Osprey overhead was pretty freakin' cool too! 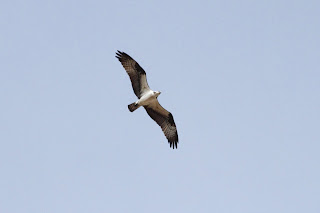 But never mind the birding, there was work to be done about these nest boxes, and Sylvia, Bert and Tom did a great job in great time with the 33 houses. I felt a little bad just standing back and watching them but Joyce assured me all was good. I bet they would have let me do something if I asked. But I figured with so many houses to check on and the weather wasn't going to stay great for long, I would watch and take photos like I intended.

So, enjoy a few photos of the OEBS members at work on this day.

Sylvia (purple coat), Tom with bucket and Bert making repairs to a nest box.  Notice the pair of Tree Swallows behind observing? 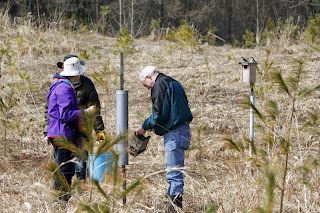 Box #17 appears to have over wintered a mouse.  His nest remains, mouse left for the Spring if wasn't scooped up by a predator over the winter. 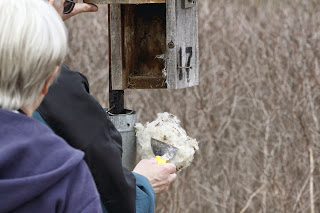 Oops, out of order...  here's the nest box from photo number one before taken down and being worked on. 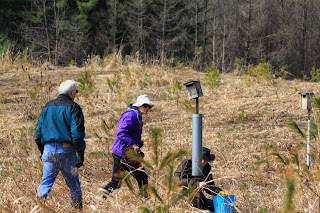 Another nest box with a left over nest in it from last year.  The only photo of Joyce that I got. 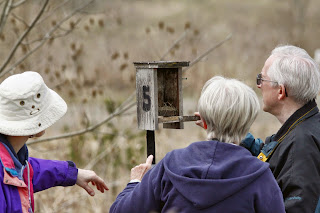 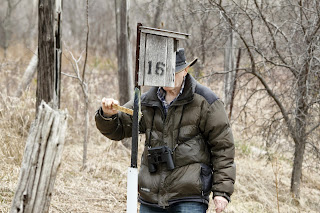 These three work great together. 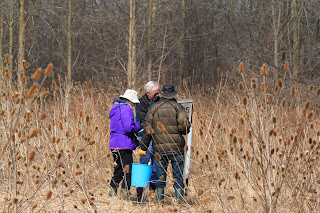 Nice to see a husband and wife sharing a common passion. 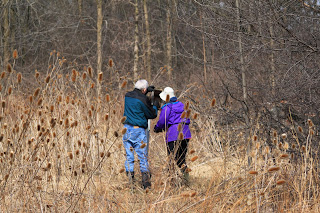 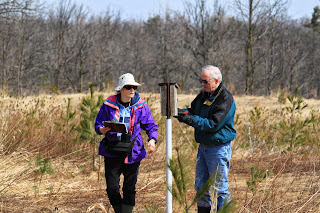 Sylvia redoing the numbers on the exterior. 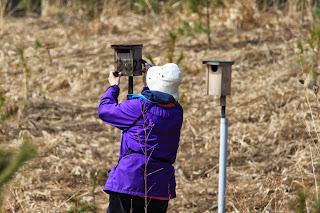 They use a few different designs of Bluebird houses.  Some are donated from others.  Some have replaced older ones over the years.  Whatever works!  Bluebirds have used all kinds, just as long as the dimension to the entry hole is correct. 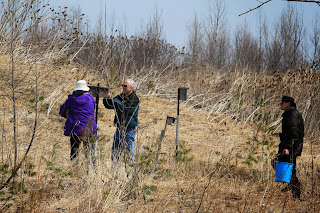 Onward to the next box! 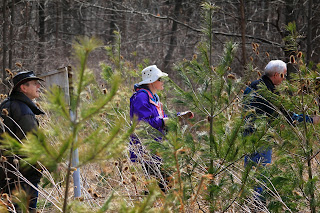 Gotta give a shout out to their dedication to the Eastern Bluebirds and all these nest boxes they look after.  And this is just one small group in Ontario who help out the struggling species.  Angie and I have plans to visit some others and their Bluebird trails in the near future. 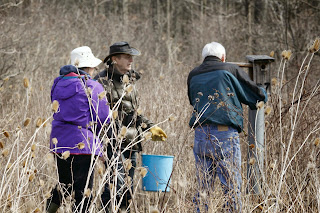 So ya, it was a fun few hours out and about with these people.  And guess what?!?!  I finally got to see an Eastern Bluebird on this walk right near the end of it.  We were on the last couple houses and this male appeared along side of the road.  I somehow knew it was going to end like this.  It was getting pretty dark out at this point, skies looked like they were just about ready to rain down on us...  so the shot is kinda blown out, but whatever, I was so happy to end the day with him showing up. 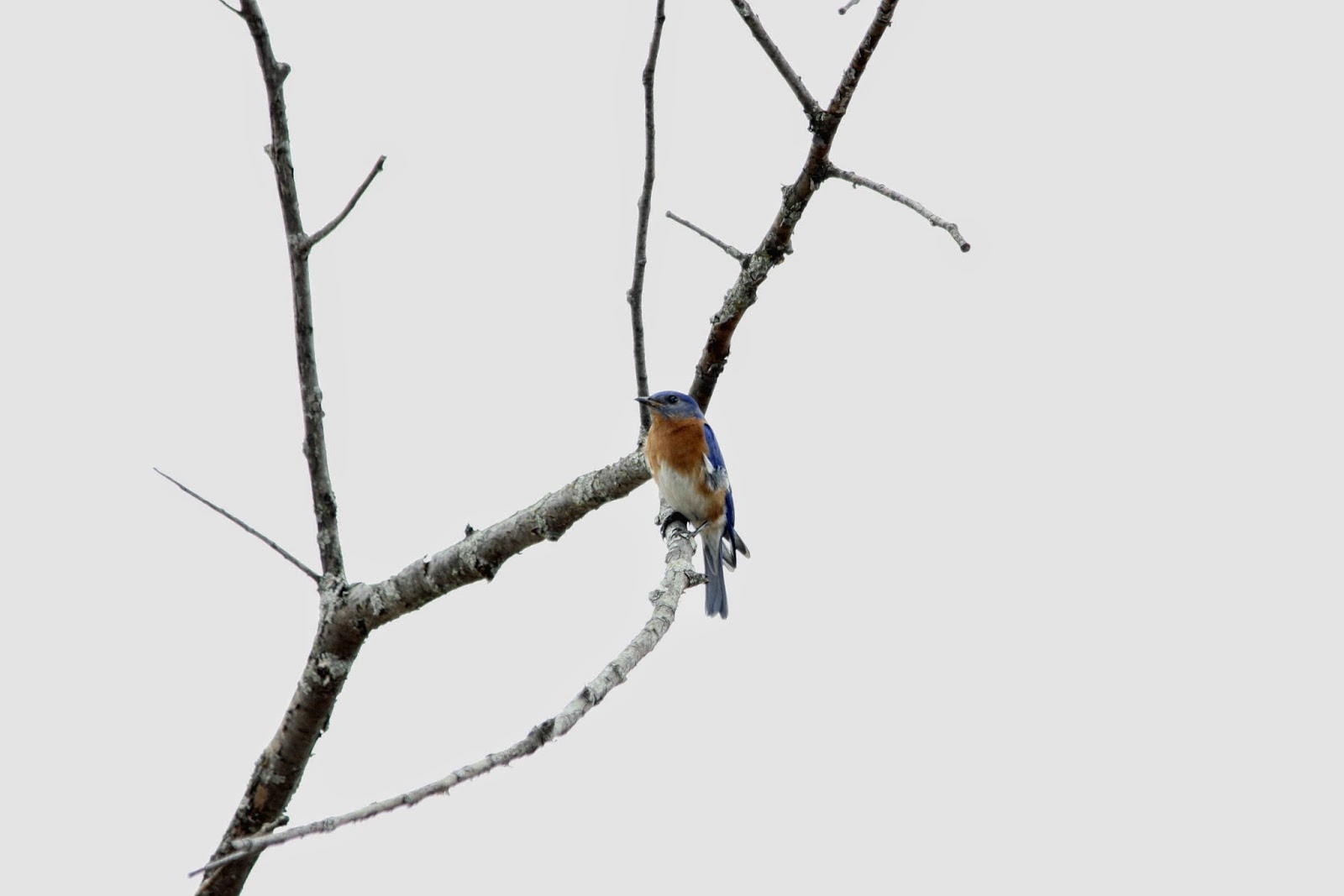 I hope you enjoyed this blog and maybe would consider joining The Ontario Eastern Bluebird society.  For a single person, it's $10 per year, and a family membership is $15.  I tell you the trip to the annual general meeting is worth it alone.  You meet some great people and listen to some really interesting talks.  Angie did a short blog about our last general meeting, see here.
Posted by Rob at 10:13 PM