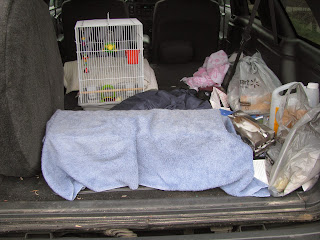 Look at that photo above.  That is the back of our GMC Jimmy on Sunday morning.  What a mess!  The empty bird cage is a blog all on it's own that will be coming later this week.  Ignoring almost everything else, just look at that blue towel now.  Underneath it is a live animal trap and in it is our Sideways Sam.  What's a "Sideways Sam" some of you may ask?  Well, he's a grey Squirrel.  And he got his name due to his condition being partially (or fully) blind in his right eye.  So when he runs around, whatever is up with that eye, makes him run in a sideways motion, always pulling to the left but he'd correct himself if he had to or just kept going that way.  I had my friends try and come up with a name for him since I drew a blank.  And in the end, Angie called this one and it stuck.

I can't really say when Sam showed up.  We have so many Squirrels running around these days and only one had been named in the last while, and that's "Baby", once again by Angie, and she will have to tell his tale one day.  But Baby stands out from the crowd and got a name.  And when I began to take notice to the "blind in one eye guy", he soon got a name.

It's only been a few weeks of seeing Sam in this condition.  We've only had 3 grey Squirrels lately and I'm sure he's one of them and whatever happened to him is pretty recent.  I'm hoping it's only an infection or something else treatable because we'd like to see him around the yard again one day.  But time will tell.

So ya, with his condition, I noticed the other Squirrels giving him a real hard time in the yard.  I guess it's the "something is wrong with this guy, lets run his butt outta here, can't waste good food on a sickly Squirrel" because sometimes I would see 3 or 4 Squirrels chasing Sam out of the yard.  Sam would flee from the terrors and watch the yard from a distance.  I felt bad and did what I could to help him.  First was coax him near me down at the back of the yard and I began feeding him steadily and ensuring he was eating and not being bothered. 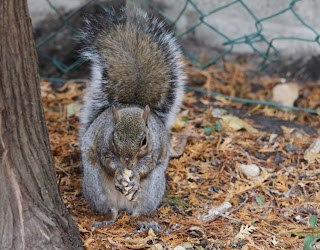 I've spent easily 45 minutes to an hour at one time with him, tossing nut after nut to him, and Sam would stay close by me, eating in peace.  He ate 10, 12, 14 in a row!  I've never seen a Squirrel eat so much, not burying anything.  And then either I had to leave or he did and we'd meet up before dark or the next day for another session.

I decided for the time being to monitor Sam and see whether he'd be okay or eventually need help.  As he ate more and more, he made some noticeable changes...  like he began fighting back against the other Squirrels.  He didn't take their crap and stood (and kept) his ground out back.  Me being home on short term leave due to my shoulder allowed me lengthy amounts of time to keep watch over him.  I relayed my observations to Angie and we both agreed that this was the best way for him right now, let him do his thing, be a Squirrel, but continue to monitor him. 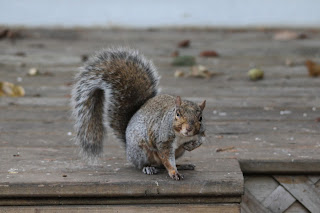 But sometime last week, I took notice to his right eye now being completely shut instead of 90%.  I also noticed all his Squirrel friends and foes packing on the body fat for the coming cold days ahead; but Sammy still looked pretty thin and runty.

I called Toronto Wildlife Centre and had a talk with one of the people in the call centre.  I already knew everything that they were going to tell me just because of previous experiences and really there wasn't a whole lot they could say without seeing him for themselves and giving him an examination.  I knew they lent out live traps with a $20 deposit and asked if they could hold one for me.

It was Friday that I picked the trap up.  I set it with some peanut butter and bread and waited and watched.  Sam was on it in no time and he was reaching in the side of the cage at the bread.  He managed to scrape some of the peanut butter off, and licked it from his paws.  I left the room for a bit and upon return, he or another Squirrel had gone in the cage and pulled the bread out without tripping the wire (setting off the trap).  Saturday we had a very busy day so there were no attempts to catch him.

Today, Sunday, we were watching him from the window.  I had been feeding him a few peanuts already.  And at one point he was running along the deck when he just fell off the ledge and dropped.  It was a little comical but because we knew of his current state, the laughter quickly silenced and concerns rose.  I set the trap up once again and in very little time, but with some interference from other Squirrels, we caught Sam!  A handful of peanuts in the cage got him in there once again.

I quickly got outside and put a towel over the cage.  Sam was making some awful grunts of being totally freaked out.  But once under the cover, he calmed down pretty quick.  I called TWC and left a message I was on my way with him and away we went.

It's about a 20 minute drive to TWC,  I turned the radio off, kept Sam covered, and wondered how this was all going to go.  Of course we want him well and back home with our crew again but its 50/50 until he gets examined and hopefully treated.  And all the while I am thinking and stressing, I hear this crunch crunch crunch in the back of the truck.  I know that sound all so well.  It was Sam eating the peanuts I put out for him.  He was shelling away and eating them!  I have to laugh about this.  Seriously?  Little Squirrel dude is in a cage, in pretty much total darkness, inside a truck, a place he's never been, no idea what's going on but he manages to stop worrying about it and eat 4 whole large peanuts, shell 'em and chomp 'em down!  Stressed out, freaked out animals aren't supposed to do that!  I will chalk it up to Sam knowing he wasn't in danger, feeling the vibe that he was in good hands.  What else could it be?

Anyways, this is where it ends for now.  I got him to TWC and here we are nearing 12 hours later.  I will call to inquire about him on Wednesday and pray for some good news.  If you feel it in your heart, think about this little guy and send him a well wish too.

I really want to see him like this outside our kitchen window again soon... 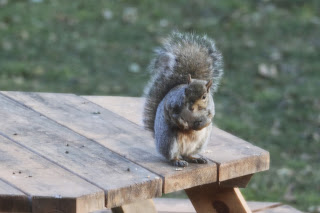 and not have this as my last memory of him... 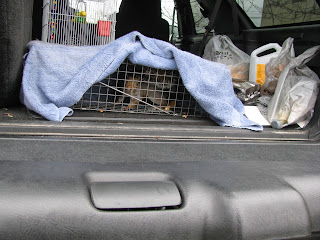 I had to have one last peek at him before I took him into TWC this morning.

Here's a video of him just before the weekend, gives you an idea why I decided it was time to get the trap and try to help him.  Click here.

Its a few days later, and I heard back from Toronto Wildlife Centre late Wednesday afternoon.  I did a short blog about the update on Sam.  Please click here to check it out for the latest!

Poor little Sam! Thanks for another great story Rob - I hope it has a happy ending.

Thanks for stopping in Kris and more so for the well wishes to lil Sam.

I am editing this blog and attaching the update in it. But here is the link anyway...