On Saturday August 12th, 2017 we woke to the sad discovery that our Budgie "Misfit" had passed sometime early that morning. 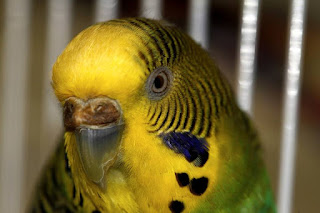 It was a shock to find but in another way, not that surprising. Misfit was an old Budgie and she was showing signs of her age for the last while. Signs were afternoon naps which she never did in past years. She wasn't interested in flying anymore. But she ate well, tweeted daily and played with her favorite toys for hours on end, even the day before she passed. She wasn't sick. She was old. It must have been her time. 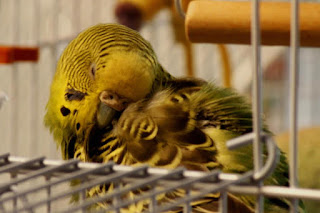 She really enjoyed having her cage door open and just walking about the outside ledge and preening for a while. 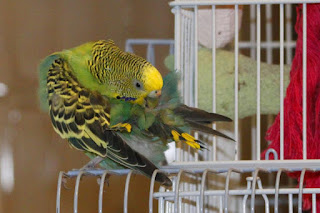 This September would have been her 10th anniversary with us. She was well beyond 10 yrs of age. I'd give at the very least 2 yrs on top of the 10 but for some reason my gut feels 4 sounds more like it.

A recap about Misfit.

She arrived in the backyard in the early part of the Summer of 2007. She lived out there for almost 4 months before I finally decided to catch her and bring her in. She certainly made that Summer out back all the more memorable. Angie and I looked out for her all the time; especially after heavy rains and thunderstorms through the night. We'd be listening out for her incoming tweets every morning as she returned to the bird feeders.

We were certain the large tree in the background was where she slept every night. I don't know the species of the tree but it's massive. If I were a little bird, I'd take refuge in this giant tree too. It's 5 or 6 backyards over from ours. 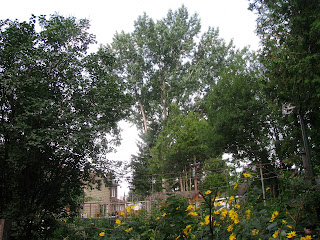 If only Misfit could talk, the things she could tell us about her life outside. We saw a fair amount of it but she could surely tell us even more. We couldn't watch her 24/7.

The Blue Jays somehow knew Misfit did not belong among them outside and they caused her a lot of grief. I recently saw them drive another Budgie out of the backyard and that bird did not return whereas Misfit did day after day. One morning we were sitting on the deck and heard Misfit screaming. Seconds later she came flying over the house with 2 Jays on her tail. She managed to evade them once again. Later in the Summer, as per norm, migrating Hawks started attacking our backyard friends. Obviously Misfit avoided those too.

What was funny is she knew her place out back. There were birds she liked to be around and could peacefully co-exist with. They were the Goldfinches. She easily beat the House Sparrows by the dozen off any feeder she wanted to feed from. I'm sure that will delight many of my Bluebird friends.

Misfit not letting the House Sparrows push her around. 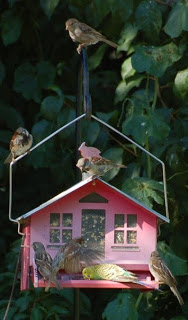 My good friend and neighbour Patricia gave me a bird cage. I set it up out back and Misfit knew when the feeders were busy with bigger birds like Grackles and Red-wings, she could fly into the cage and eat in peace. What was even funnier is that over time some of the Red-wings and Chickadees caught on to this and they too would slip inside for a feed of millet seed or on a Budgie stick.

So when September was coming to an end in just over a week... I did my best stealth like walk outside, going to the cage and shutting the door when Misfit was inside. Talk about a freak out! She was aware of me throughout the Summer but she wasn't tolerant to me being near, this increased over the weeks as she grew accustomed to her wild life.

It was months of patience and understanding, giving her the space she needed and the respect she deserved to take that wild bird out of her. Seeing her in the first few weeks ripping chest feathers out was a little heartbreaking. But we weren't going to release her back outside. Some would argue that I should have left her out there because she was so happy about being a free bird. I would agree if we lived somewhere in Florida or her native home of Australia. But in Canada? No. She would surely perish at some point in the winter.

Misfit did eventually calm down. She never became a hand tame bird but that was fine by us. She loved music, especially Frankie Valli that Angie had introduced her to. We often let Misfit free fly about the main floor of the house. Our last cat Meadow never gave a s**t about Misfit. She could be 3 ft away from the cage and be like "whatever".

This photo has crushed me ever since Meadow died. It crushes me more now with Misfit gone. 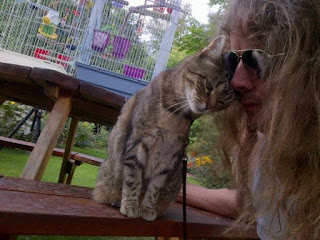 Even after we caught our second Budgie Moonie about 5 years later, Meadow still had no interest in the birds. 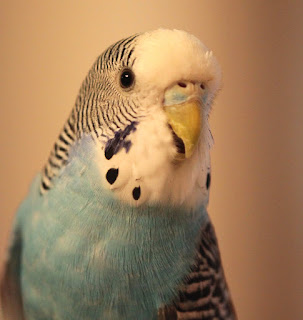 So, going back to that free flying bit about the house, it leads into my next little tale. We were approaching Misfit's one year anniversary in the house. There was a mishap with the front door being open just a little too long, Misfit was in the kitchen but suddenly she came flying through the living room and went over our heads and straight out the door. It happened so fast.

Miraculously we got her back 2 hours later. It was her choice to come home. She could have kept flying straight south west as she left the house but instead she came back to the yard. Angie had run outside and was calling for her. I got her cage set up on a table in the yard. It was a long tease as she flew here and there. She sat with the Goldfinches for a bit and tweeted away with them. It was almost like a reunion. She was so close to us but just out of reach. This was September and Hawks were migrating. Sure enough at one point in flew a Sharp-shinned, all the birds scattered including Misfit. In the moment we thought that was it, we lost her. Silly us. She returned again. As I mentioned, about 2 hours later, she hops into the cage, kinda like "okay, I'm done, this was fun, I'm ready to go home now" and in she came. Tell me that doesn't say she was meant to be with us?

Later that day we went out and bought Misfit a new bird cage. A cage meant for a Princess I suppose because it was more like a castle than a simple cage. The reason we got her a new cage is because the bars on her old cage were just a little too wide. I learned Misfit could squeeze herself through those bars whenever she wanted. She did this often when I was at work. Angie was not living with me at the time. So I would come home and occasionally I found Misfit somewhere else other than her cage OR I would find her inside but I would see traces of her being elsewhere while I was gone. How comical to know she would break out of her cage when she wanted out, but she would also break back into her cage as well! I found myself leaving her door open more because of this habit of hers. We got a new cage to protect her, one from escaping, and two if she ever got herself stuck when squeezing in and out of the old cage. She still got her free flying time daily but under the strict condition that no one was allowed to enter or leave the house during this.

She was a very unique and special bird.

She loved to sit on the old ceiling fan in the kitchen. We would lightly hand spin it and she enjoyed going for the little ride. 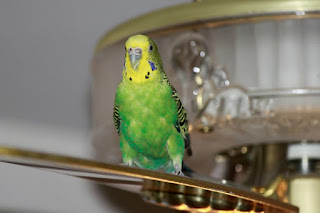 I thought the name "Misfit" was very suiting for her because she really was just that. It's easy to see why she stole our hearts so early on in our life together.

We had that major egg laying spree of hers a few years later which sent her to the hospital and I had to give her hands on care for a number of weeks. I will attach that blog link here instead of retelling it. It definitely was a bonding moment. And reminded us how much she meant to both Angie and I.

Saturday August 12th, 2017 a little something inside of me died when Misfit passed away.

We all are going to miss her, even her "bird sitting" people being my parents who enjoyed looking after her.

We will take pride in knowing she got a 2nd chance with us, a 3rd if you add her great escape of 2008. She really did have a wonderful 10 years of life in our home.
Posted by Rob at 12:39 PM

OMG! So sorry to read about Misfit's passing. I remember the egg laying blog. Poor dear. May she rest in peace.

My dear friend, I'm sorry to know about Misfit, I'm sure she was very happy to live with you both.
Norma

Its been a month. I am missing the animal stories! Bring them back. Hope you are well, co animal lover!