Some of you out there may not know that Southern Ontario got hit with a pretty nasty ice storm the weekend before Christmas.  In the eyes of some in other parts, it wasn't that bad, just because they had seen worse...  like Quebec had in 1998 I believe where many people were without power for 3 weeks or more!  But for myself, family, friends and most people around here, we had never experienced anything like this.  The devastation to the city as trees froze and fell apart from the weight of the ice.  So much property damage everywhere.  And of course, the power lines that fell too and left many of us in the dark.

Angie and I lucked out here, having lost power on the first and second night, for only 4 hours at a time, from about 3am to 7am.  Some people went much longer, worst being 9 days!

But despite all the landscape carnage, life carried on, especially outside with our wildlife friends.  I've noticed this year, as in this winter season, which started really early and has given us more snow and cold weather than I can recall in the last 5 years or so, the backyard activity sure picked up a lot.

I do "project feeder watch" for Bird Studies Canada and one Sunday just a couple weeks ago, I had 128 birds counted with 14 species.  That's a new record if I am not mistaken.  And even the morning after the ice storm, the feeders were the meal place of choice for a lot of birds.

Here are some pics from the days just after the storm, which will help tell the story of the Toronto Ice Storm of 2013 from our backyard. 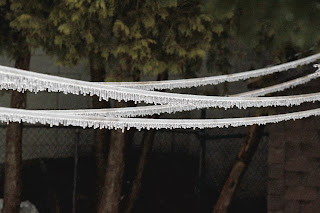 One tree out back of the house lost a  lot of branches.  The cracking noise was so loud and when the branches let go, it was so sudden, and they all seemed to fall in the same spot.  Quite the brush pile out there now! 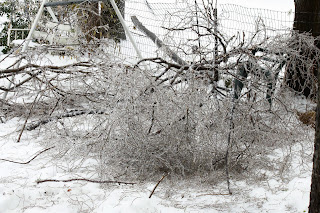 The Squirrels were liking the pile and many birds hid out in there too with the Hawk threats about. 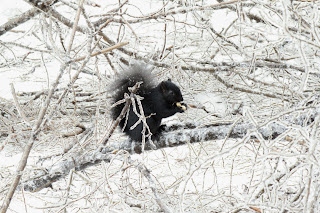 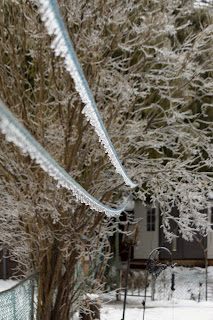 Branches from the Lilac Tree. 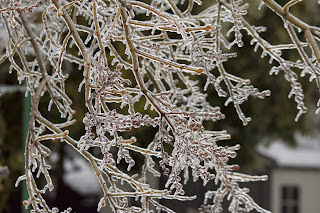 A few yards over from us.  That tree in the centre of the photo, drooping to the left...  it's not there anymore. 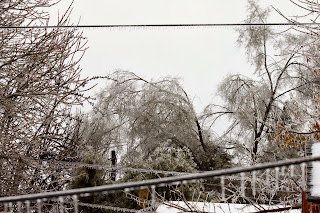 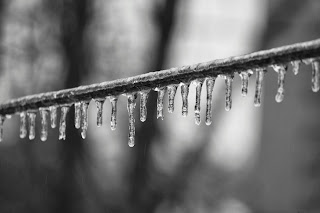 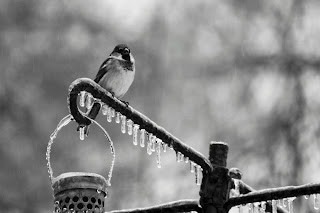 American Goldfinch feeding from the non-icy side of the feeder. 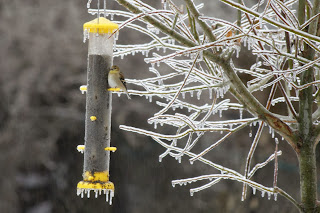 The bird bath opened up in the middle, despite the ice hanging from the sides.  Starlings took full advantage of the open water and splashed around in the afternoon after the storm. 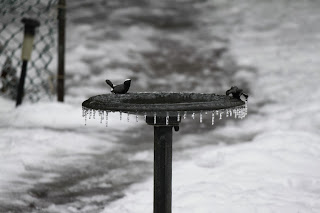 This Mourning Dove's tail was frozen.  We could see the icy glaze over it, watched him drag it along, but it did not effect his flight abilities. 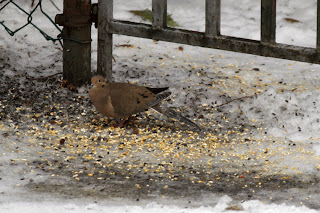 The Jays could not get the peanuts from the ring feeder as it was just one big frozen lump.  But the Downy Woodpeckers had no difficulty hammering through the ice and peanut shells to get to the goodness within. 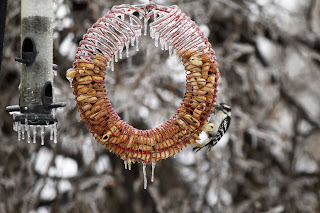 Thanks to the storm, we are seeing more American Goldfinch than what we have in quite some time.  A few years back, we'd have 2 dozen easy.  The numbers dropped considerably and this year it was random sightings until that banded female showed up around my birthday in September.  This past week I've counted 10 in one visit! 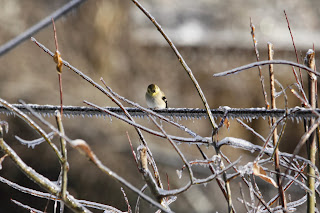 I had to bring the feeders in over night, to thaw them out, and be able to refill them for the birds without fear of cracking the plastic tubing. 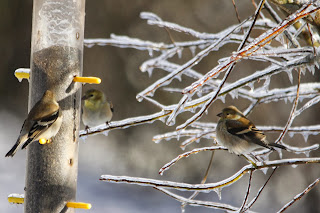 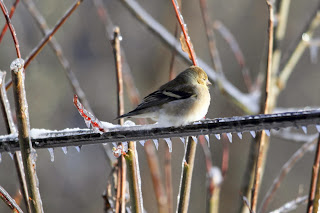 Light enough they is to not break the branches covered in ice. 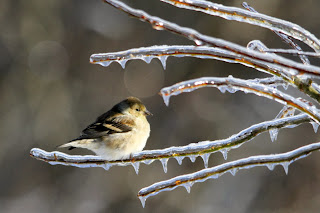 I did notice a number of birds, like the Goldfinch, and more so with the Mourning Doves, having difficulty landing/stopping on the ice. 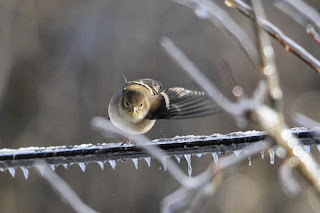 The Northern Mockingbird continued to visit us through the storm and afterwards. So happy to see someone enjoying the Holly berries! 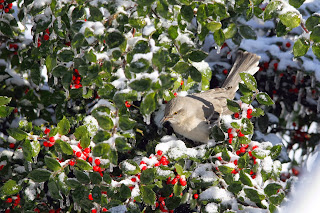 And as Christmas arrived.  Still lots of ice around.  We weren't able to get a "Critter Christmas Tree" which we decorate with edible goodies for the wildlife.  So we used the brush pile shown earlier in the blog.  The Squirrels were loving the apple slices hung from some branches. 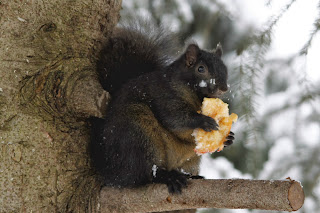 Four Downy Woodpeckers still came daily, trying to get on the suet feeders covered in ice until I was able to thaw them out too.   It was a task getting them feeders off frozen feeder hooks and branches without damaging the feeders or the trees. 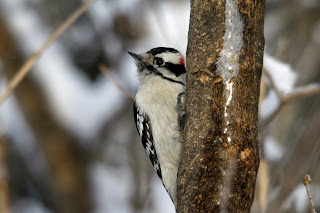 We had one American Tree Sparrow the other week, but now there's four of them.  It's been a delight to see and hear them out our back door.  They aren't shy either, quick to come in for shelled sunflower hearts and cracked corn with me out there delivering the goods. 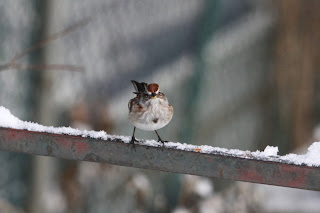 Such a nice addition to the backyard this winter.  We've never had Tree Sparrows visit us before. 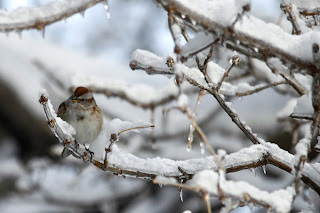 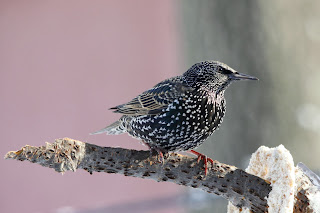 We've got the happiest Squirrels during the Christmas season and days after the ice storm. 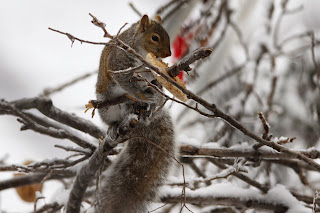 Shirley the Sharp-shinned Hawk has been visiting more since the storm.  She caught herself a male House Sparrow. 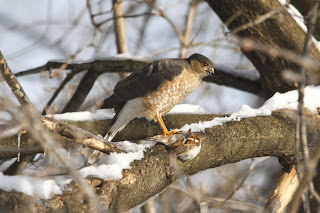 Another day, another visit... I guess she was "getting rid" of the House Sparrow here.  Haha! 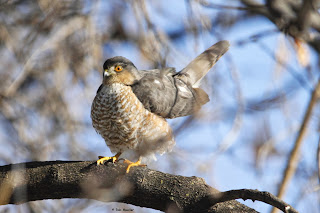 Cardinals, Jays, Juncos, House Finches are also visiting.  But my flock of Pigeons is not.  I'm seeing no more than 3 or 4 any given day.  Jesse is one of the regular visitors but my pal Pierre is not.  I've not seen Pierre since just before the ice storm.  I do hope he is okay and comes home soon.

I've ventured out to some of my favorite walking areas and the devastation is unreal.  One I found most upsetting is this Screech Owl cavity is no more.  The tree broke at the cavity point and I hope the little Owl was not home when this happened.  I had so many great views of the bird here.  In this shot, it was during the "golden hour" the other winter, and he was trilling as he rose to greet the evening. 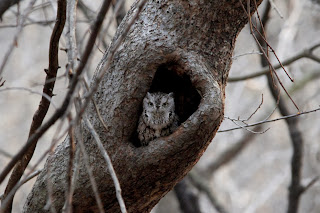 Here we are 9 days after that storm, it seems everyone in Toronto has power restored in their homes, and have heat once again.  There is so much still to clean up though and I won't be tackling our mess until the Spring.  Mother Nature is beautiful but can be very dangerous too!  When she lets go like this, there is nothing we can do, but ride it out and hope we all make it through.

I hope you all who went through this with us have come out okay as well.
Posted by Rob at 12:44 AM

What a terrible storm it was. Ice Storm '98 was the worst, though.
The ice crust on our backyard snow is terrible for the deer.
I adore your photos and your friends. Glad others name their critters!!!

Glad to see your photos! I was feeding my backyard buddies and taking photos too. Meanwhile I had family knocking on my door looking for warmth because I had power. Sometimes you have to see the beauty! I always stop and appreciate the small things. I know you do too! Happy New year and keep posting here.
I lost a large section of tree as well. No animals went near it but as soon as I went outside a black squirrel jumped up into our broken tree and almost as if he was pointing and saying "look"! He was slipping and falling, but he toured all the broken stuff to show me what happened to their favourite tree!

awesome site desing and i found your site very rich with contents ,thanks for sharing some nice contents with us Toronto Beauty

I am happy to see your all the photos. Storm is a different type of the bird. this is a adorable post. keep it up..

Giving me Best Advice from Your Blog. For Pet Maltese Best Price in Delhi. Beagle breeders

Giving me Best Advice from Your Blog. For Pet Beagle pup for sale. Beagle breeders

Giving me Best Advice from Your Blog. For Pet Maltese pup for sale. Maltese breeders

awesome site design and I found your site very rich with content,thanks for sharing some nice content with us
Pug pup for sale in India
Buy Rottweiler Puppy Online in India