On September 17th we celebrated our 6th year with Misfit joining our family! 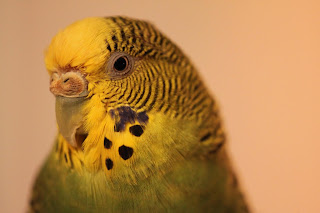 She showed up in late May of 2007, and lived in our backyard (and surroundings) until September 17th when I finally decided to bring her in with the Autumn approaching and nights were getting colder.

A friend gave us a bird cage and I left it out back all summer.  Misfit ruled over the House Sparrows but wouldn't dare mess with the Blackbirds.  So when she was lower in the pecking order at the feeders, she would retreat to the bird cage and eat the seed within that I left out for her.  Funny thing is that the Chickadees and Red-winged Blackbirds caught on to this and also entered the cage for a good feeding in peace.  I so wish I got photos of that!

But I was fortunate to have our friend Alex over one afternoon, with her camera, and we captured this image.  Those were the days of me running around with a disposable camera and I'd need to be "in your face" to get a decent picture of anything.

The Blue Jays hated Misfit.  She was foreign to them.  They didn't recognize her as a regular bird, more like an intruder, and they would scream and chase her often.  Some days Angie and I would be sitting out back and we'd hear the screeching and Misfit would tear through the yard with one or two Blue Jays right on her tail.  But she always escaped.

Summer can bring in a few wicked thunderstorms and I recall one or two we had and the next morning we'd be sitting outside with morning coffee, waiting to hear her call from the neighbour's giant tree as we call it (it's really high) where we were quite certain she roosted.  And yes, she always let out her morning calls, and eventually flew in to feed.

It's only 6 years ago but seems so much longer now.  I don't remember the house much from days before her, the quiet days in the kitchen without a Budgie (or two).

After her capture, it was months of work with her, letting her set the pace on how things were progressing with us.  First thing was to build up trust and respect.  And in due time Misfit calmed down to a more relaxed bird and family member.

Our first cage for her had the bars being just a little too wide, just enough for her to squeeze herself through and get out when she chose.  The really funny thing is that she also squeezed herself back in when she was done.  I found evidence of this many days while I was away at work and before Angie moved in.  Often I left her cage door open and let her come and go as she pleased.  But on her one year anniversary we had a mishap...

Misfit out in the kitchen, we had my parents over, and as they were leaving, front door open, we talked just a few seconds too long and Misfit came flying through the living room, right over our heads and out the door!

That's a story on it's own but end result is 2 very long hours later, we got her back when she back into her cage when she got hungry.  I can still remember her sitting in the cedar tree, so close but so far away, and she was communicating with a Goldfinch.

That evening, after we calmed down, we went out and bought Misfit a proper cage.  It's more like a castle but the main thing was the bars were not going to allow her to go out when she chose to.  She still gets her time to fly around but it's under more controlled situations, like nobody goes in/out of the house during this.

I guess the rest is history now.

She's not the most affectionate bird, never was hand trained, but we have a special bond with her that took a long time to create.  The vet calls her the exception to common rules of being a Budgie.  She's a fierce girl and she's her own bird.

May we have many more years of Misfit's company in our house.

Some of you may recall the situation we had last fall with her and the broken egg.  We almost lost her.  But with lots of love and care, she recovered the whole ordeal.  If you missed it, don't remember or are new to my blog, here it is...  What I find interesting is that this blog is actually in my top 5 most read blogs ever and it's less than a year old.  I want to thank everyone that visited, read it, and hopefully sent her some love.

Here's a short video of me medicating her.  I made it look so easy but this was on the last day of it all, almost 2 weeks later.  It went from a 20 minute ordeal to less than 3 minutes.  If anything, this is a reminder to me, if it happens again, I can do this no matter how freaked out I get about administering liquid meds to a Budgie.

You're such a good man Rob!