A few weeks back we took Meadow in for her annual check-up.  She's been going every July since her one year birthday and gets the works.  They've been tracking her blood from the very beginning and compare each new sample with previous years for any changes.

Meadow turned 9 this July.  Her check-up seemed to go well, and she lost just over one pound which was awesome. 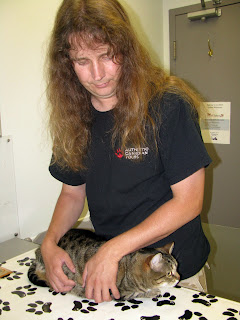 The following day we got our normal phone call from the vet regarding her blood work but this time there was some issues, white cells down significantly and they wanted to do another blood test and a urine test.  It's kind of a blur now but words like leukemia and diabetes were put out there as worst case scenario along with something about a low grade virus (like a cold) being on the least case of possibilities.

About ten days prior to her annual, we did notice Meadow being more lethargic than usual.  And her appetite was down.  We blamed this on heat and humidity.  My Grandma used to say this about one of her cats, "he's just not a summer cat" as this one guy, Pinky, changed entirely in appearance and attitude from summer to winter.  And Meadow does the same from when it's 35c outside to 15c going from a lazy Lion to a hyper kitten.  While she's not into the heat, she will spend far too many hours on the top floor of the house and sleep away to a point where she can be sick like.  We've started closing the door to the upstairs on some of the brutal days we've had in recent weeks.  We have central air but it just can't cool to the top of the house which is like a finished attic, one room across the top.

We were asked to wait another 2 weeks before bringing her in for further tests and the vet told us to try and not worry about it.  HA!  How could we not?  She's our little baby!

And now speaking for myself here (Angie has her own unique bond with Meadow that has been years in the making, something she may blog about one day)...

Meadow has been with me since she was not much more than 5 weeks old.  She came into my world some months after I bought this house and was the reason I finally settled in here. 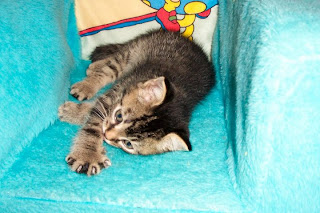 She's been with me just about every day since then.  She's my sidekick.  We watch movies together, we eat together, we nap together, and she gets involved with much of what I do inside and outside the house. 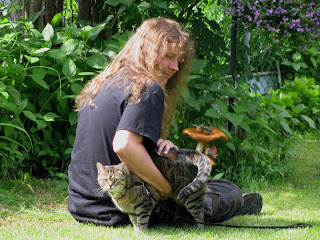 In our younger days, we'd be outside filling up bird feeders at 1:30 in the morning, middle of winter, sub zero temperatures.  Kinda crazy to some people but it was one of the many adventures we shared over and over.

About 5 years ago she sent me to the hospital one night after a misunderstanding at home lead to something pretty bad.  Cat bites can be terrible for your health.  I was in emergency, hooked up on an anti-biotic through IV.  It was even suggested by one of my closest friends at the time to put her down.  He said she probably had a "blood lust" now and would never be the same.  But for me, like any person with some common sense and a love and understanding with our pets, knew what happened, why it happened and that it would not happen again if played out differently on my behalf.  The whole story is right here.

We have so many memories now after 9 years.  And hope we have many more over many more years to come. 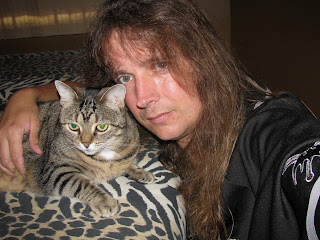 But I let the worst case scenario get the best of me in our waiting time.  And it got worse with every day that came closer to her next appointment.  And how the age of 9 can already be classified as a senior for a cat boggles my mind.  She will always be my little baby, no matter her age.  And what if she was really sick?  What then?  What if our time was going to be cut short?  I didn't even research anything during the wait time, I just swallowed it up, and it grew like a tumor in me over the 2 weeks and I was ready to explode.  Something I won't do again.  It made me emotionally exhausted and physically ill.  I have understanding friends I can talk to about this but I didn't.  And I should have opened myself up more on this to Angie.

Finally the day came, and we took her in.  It was shocking to us that they took her immediately to the back where the labs are, and we weren't allowed to come in.  Usually we talk with a tech, the vet, and then things get done.  Just bing boom bam, get 'er done, and that was it.  About 15 minutes later, a tech came out and said there was a problem with retrieving a urine sample from her.  We had a choice.  Leave her with them or come back another day and try again.  As much as we didn't want to leave her, it was the best thing, lets get this done today.  And we left.  We were both stunned to be leaving the vet without Meadow,something that's never happened before except when she got spayed at 6 months.  And over the next 6 1/2 hours at home, waiting and wondering, the house didn't feel the same with her not in it.  Even if we don't see her for hours while she naps, the comfort of knowing she is there is all we need...  and we didn't have that.

This shot makes me sad as you can see the fear and confusion in her one eye peering through her carrier. 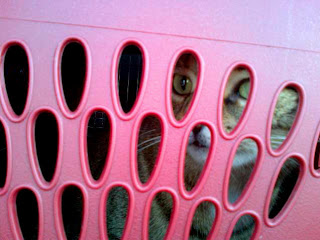 In the end, all was well.  She recovered from whatever *bug* she had and everything was good with her.  Recommendations for some diet changes have been suggested once again, moving her into a senior blend of food.  There's that word again...  senior.  Blah!

I couldn't help but think the worst.  This was new to me.  Sure we've had other cats in the past, and I was very close to them too; but it's different with Meadow.  I am sure anyone reading this will get that if they've had that special bond with an animal.

Here are a couple favorite photos of Meadow... 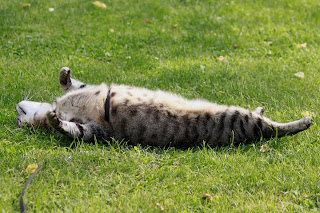 A reminder to us all, that one must stop and smell the flowers every now and then 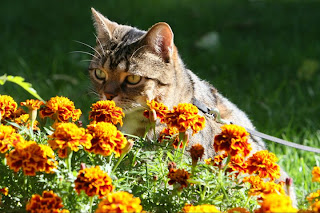 So glad she is okay. They are indeed our babies.

Having lost (to sudden illness) one of my babies this past March, your post really hit home for me. I'm SO glad for you guys that everything worked out with Meadow and she's okay! Keep taking good care of her like you always do and she'll give back as much as she can.

Thanks for the read and comments. :)

It would be nice if a lot more cat owners were like you guys. Our shelters would have a lot more room. Why don't you have more cats?

The house felt "empty" without her home.

So glad she is okay. There is nothing worse than waiting to see if your best buddy is sick. I was in tears thinking about what you guys went through. So happy she is okay and everything is back to normal. :)

Helpful info. Fortunate me I found your web site by accident, and I am surprised
why this coincidence didn't took place in advance! I bookmarked it.
my webpage > check our their site